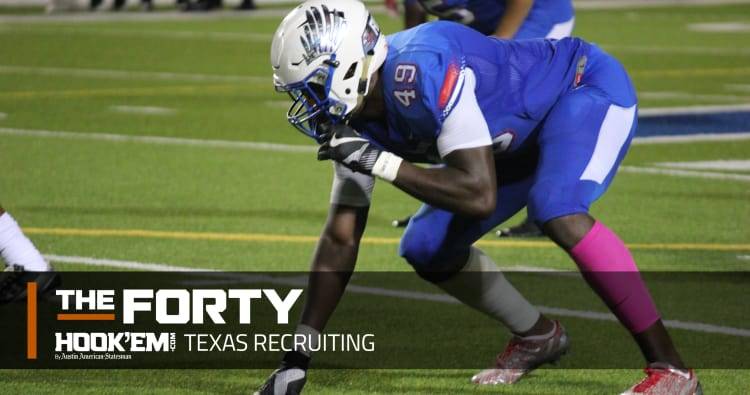 Losses on the field not impacting recruiting

The teenagers are keeping a cool head despite Tom Herman’s 3-4 start at Texas. The fans overreact. So does the media. Not the kids. They seem to understand the process Herman and his staff are undertaking to put the Longhorns back to national relevance.

People see wins and losses I see a team who is changing !!!! #TrustTheProcess 🤘

“Texas is only a few points away from being one of the best teams in the Big 12 and this is only coach Herman’s first season as the head coach,” said recent defensive back commit D’Shawn Jamison. “Changing the culture inside a program takes more than one year. We all know that and that’s why he needs us on campus.”

Losing does impact recruiting, however, and if Texas is 3-4 in 2019, the conversation changes. Herman wouldn’t hold the benefit of the doubt with recruits. Losing just won’t impact the current recruiting class because Herman never used a win-right-now sales pitch.

The sales pitch on the recruiting trail is the same, and as true, as it was back in the spring when Herman began to form this class, which now ranks as the second in the nation and first in the Big 12: We’ll improve, and there will be spots for the taking as true freshman.

Elite recruits want playing time. The goal is to reach the NFL and that becomes easier the faster a player gets on the field. Texas is losing, but it’s losing in a respectable matter, even if that doesn’t mean much to the adults in this equation.

Texas started four true freshmen on offense against Oklahoma State from a 2017 signing class considered the worst in recent UT history. We’re to assume the elite-level recruits in 2018 aren’t watching these Texas games and licking their chops? Name me a position where Texas doesn’t need an influx of talent? I’ll wait.

“Losing sucks,” Sam Ehlinger so eloquently put it Saturday after the overtime loss. It does, but don’t expect Texas to lose recruits in this current class because of the record. The prospects will allow Herman time.

Joseph Ossai impresses in a loss

Conroe Oak Ridge started the season 6-0 and defensive end Joseph Ossai is one of the main reasons for the program’s turnaround after years of failing to reach the playoffs. Oak Ridge suffered its first loss last Friday at home to The Woodlands, but it wasn’t due to a lack of effort by Ossai, a 4-star defensive end who will choose between Texas and Texas A&M on national signing day.

Ossai, the No. 25-ranked player on the 2018 Fabulous 55, started the cycle as a Texas A&M lean, calling the Aggies his “dream school” multiple times at camps and even at Texas’ junior day. But he never committed to Kevin Sumlin’s program over the summer, giving Texas room to maneuver into the picture.

“I’ve always said I wanted to take my time and get as much information as possible on the schools before making my decision,” Ossai said. “I’ve enjoyed my times at Texas when I’ve visited and it is a great academic school. So is Texas A&M. It’s a tough decision.”

The 6-4, 220-pound prospect is a pass-rushing specialist who’d likely play linebacker in Texas’ scheme, similar to how Naashon Hughes is used. It’s an intriguing prospect for a player who enjoys attacking the quarterback.

“I’m looking for the school that is the best fit for me, not only academically, but how they want to play me on defense,” he said. “Texas is improving greatly on defense and those guys are attacking out there.”

It’d be hard to call Texas the leader because Ossai still has his official visit to Texas A&M scheduled for November. But the Longhorns are in much better shape than most expected this late in the cycle and the fact that Ossai visited Texas for the Oklahoma State game so recently after his Oct. 6 official visit is a good sign.

The 5-star cornerback from Houston Lamar announced he’ll decide between Texas, LSU and Ohio State on Oct. 30. That date isn’t set in stone and my visit with Cook on Friday after teammates and Texas commits D’Shawn Jamison and Al’vonte Woodard received their Under Armour All-America Game jerseys indicated Cook is still in limbo.

Cook said on-record that he “hopes” to decide by Oct. 30, but sources close to the cornerback indicated that he’ll move that date back if he’s yet to pick a school instead of making a rash decision on that date and wanting to change it later.

Ohio State was the leader as recently as September before the Longhorns moved up his list on Sept. 29 following red-carpet treatment on his Sept. 29 official visit to Texas. An official visit to LSU on Oct. 14, and a look at their potential depth chart for 2018 at cornerback, put the Tigers right back in the mix.

“This is a hard decision,” Cook said Friday. “I’m still legitimately deciding and I couldn’t tell you for sure where I’ll pick right now. I have great options and just hope I make the right decision.”