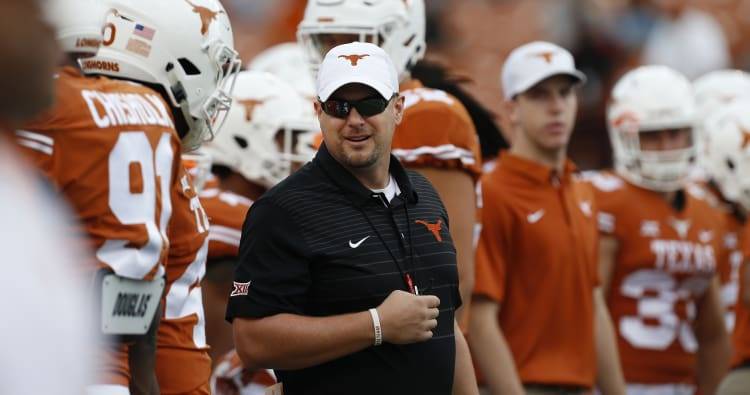 Here are the highlights:

1. As reported Sunday night, Sam Ehlinger is in concussion protocol. So is Zach Shackelford. They’re both considered day to day.

2. With Ehlinger missing practice, Jerrod Heard will move over to the quarterbacks room. Herman said the medical staff noticed Ehlinger wasn’t quite right on Saturday night; he went home and still showed some symptoms on Sunday. Herman said it wasn’t known at what point during the Oklahoma State game that he was hurt.

3. Shane Buechele will start if needed. Herman said the sophomore is still wearing a boot to protect his ankle, but that it was more for precaution than anything else. And Kyle Porter, who missed the Oklahoma State game, is back.

4. Despite another close loss to a highly-ranked team, Herman said the Longhorns are in a good place.

“A lot of teams in the country would have splintered at this point,” he said. “It allows us the learning opportunities to grow and our guys have embraced that. We know we have a lot of work to do. We are committed to doing that and making sure at whatever point it is that we break through that barrier and wind up winning the games we had on Saturday. The only way we know how to do that is to keep swinging, keep working, work harder, work smarter, more together, and pull together in that little bunker that we have in Moncrief.”

5. Herman also was asked about fan attendance — or the noticable lack thereof — at Royal-Memorial Stadium on Saturday. The student section as well as the south end zone were light on UT students.

Beyond that, some of the more interesting moments came when a Daily Texan writer asked if Herman was concerned about the number of hits Ehligner has taken in recent weeks, in terms of risking a possible injury.

Herman seemed confused by the question. “How much do I worry about putting his health in jeopardy?” he repeated.

The question was repeated.

KLBJ’s Ed Clements asked whether Herman — who showed up today clean-shaven — had shaved it all off in order to change his luck.

The coach then explained that he simply shaved a little too much off “and went too far and it was gonna look bad,” so he decided to keep going and shave it off and start over.

“I anticipated difficulty. There’s no secret to that,” Herman said after a pause. “What keeps coming back in my head is when you tell a woman that you love her, and that I wanna be a college football coach and here is what it’s going to entail, and you’re both in love so much it’s ‘Yeah, we can make it work, it’ll be great.’ But then you’re moving every two years and you’re living in Huntsville, Texas and Ames, Iowa and places you’d never imagined, and the reality of how difficult it is sets in.

The post Tom Herman: With Ehlinger’s status in doubt, the close shave against OSU is in the past appeared first on Hook ‘Em.