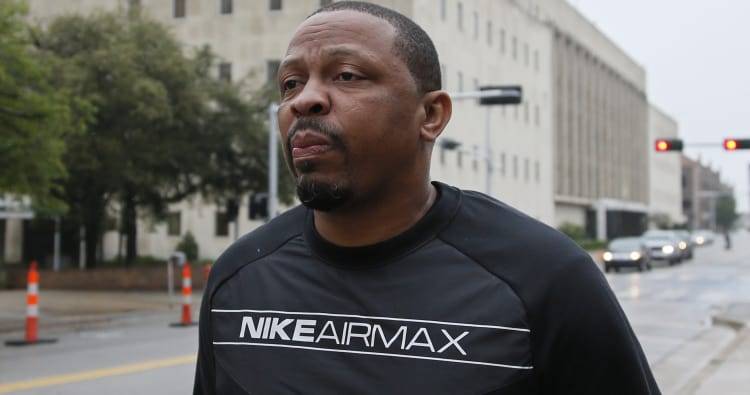 Oklahoma State coach Mike Boynton would not address reporters’ questions at Big 12 media day about the issue. Former Cowboys assistant coach Lamont Evans was one of the first swept up in the wave of arrests in September.

“I know that everybody wants answers to some of those things,” Boynton said. “Really can’t answer much with regard to the investigation. I will tell you just like everybody else in the country, probably in the world, when that headline comes across your phone, because I was on the plane that morning, I was shocked!”

The investigation is being led by the U.S. Attorney’s office in New York. The probe focuses on whether coaches accepted bribes from shoe companies to steer players in certain directions. All Oklahoma State players have been ruled eligible. Texas officials have said the Longhorns have “no reason” to be concerned.

Bowlsby said the league held an athletic directors meeting, and “they’re not quite sure where to go.” The league office, much like the rest of the nation, only learned about the investigation after the FBI started making arrests.

The NCAA has provided guidance, Bowlsby said, that encouraged schools to go back and essentially double down on compliance efforts. Still, the NCAA enforcement staff does not have subpoena power to chase down bad actors.

Bowlsby said its not hard to see this type of investigation stretching into college football,” especially as you think of 7-on-7 and some of the non-scholastic aspects of it,” he said.

Frogs looking up: The biggest preseason surprise may have been TCU landing third in the coaches preseason conference poll. The school had never been picked higher than eighth. The Horned Frogs won the NIT last season and are the clear up-and-comers under second-year coach Jamie Dixon.

“TCU’s going to be a force in our league as long as he’s there,” Kansas coach Bill Self said.

Asked if he was surprised to be picked higher than TCU’s football team was in the preseason, Dixon said, “Gary (Patterson) was giving me a hard time at some point, but I guess he’s getting the last laugh right now.”

TCU got a scare in August when it was announced guard Jaylen Fisher suffered a torn meniscus injury. He missed the team’s trip to Australia, but Dixon expects him to be ready for the season opener.

Women back to KC: The Big 12 announced the women’s basketball tournament will move back to Kansas City in 2020 and will once again be played alongside the men’s event. The women’s tournament was played in Kansas City’s Municipal Auditorium off and on for years but broke away from the men in 2013.

Bowlsby said Kansas City officials have poured $5 million in upgrades into Municipal Auditorium, a 10,000-seat arena that opened in 1936.

More rule changes: Curtis Shaw, the Big 12 coordinator of basketball officials, said there are 26 new rules this season but only 10-12 that affect the actual game. The NCAA rules committee wants to see scoring in the 80s. Thus, officials will be calling it much tighter, especially on the low block.

“I think the only thing that is a little bit alarming to me is that we act like there’s never going to be any contact,” West Virginia coach Bob Huggins said. “If it has no effect on the play, why call it?”

“You always had abusive fans, but it wasn’t to the level that it is today. I think our fans have gone overboard,” Shaw said. “We’re just waiting for a fan to come out and hit a referee.”

When it comes to rebuilding Texas, Aggie fans have a leg up on Longhorns