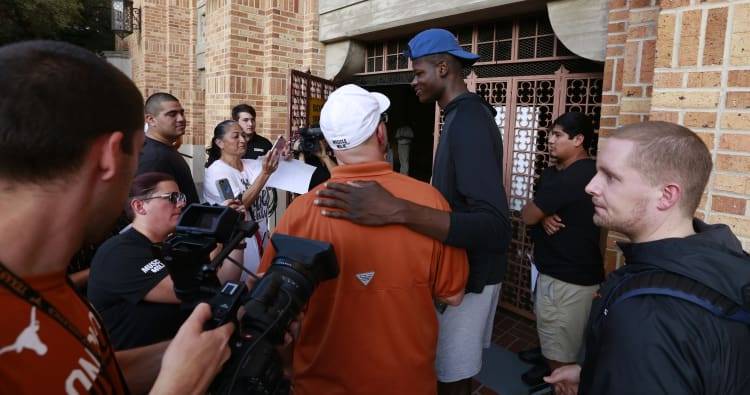 KANSAS CITY, Mo. — No offense to Shane Buechele, but count Mo Bamba is among the Sam Ehlinger fan club.

The Longhorns’ 7-foot freshman raved about the football team’s dynamic freshman quarterback during Big 12 media day at Sprint Center. Bamba, like most Texas fans, was heartbroken after the final play of last Saturday’s 13-10 overtime loss to Oklahoma State.

“The last play on Saturday, I had mixed emotions about it,” Bamba said of Ehlinger’s game-ending interception. “I texted our group and said, ‘I’m hurt right now.’ I’m so hurt right now.

“But he’s a freshman, and he’s going to make freshman mistakes,” Bamba added. “But the way he’s been embracing his mistakes, he said, ‘It’s a mistake I’m going to probably make and it sucks that I cost us the game, but we’re going to bounce back.’”

Told that UT fans hope Bamba can turn the basketball team around like Ehlinger has done on the football field, Bamba said, “Yeah, I hope. I certainly hope.

“But one thing that he’s done well of all the freshman quarterbacks I’ve ever seen, he’s really good on leading,” Bamba said. “He really put his arm around guys and leads. He’s doing it as a true freshman.”

Originally from Harlem, N.Y., Bamba wanted to attend a school where he could get what he calls the “full college experience.” That’s certainly possible at UT. He won over fans by donning a black cowboy hat for an in-game interview on the Royal-Memorial Stadium video board. Everywhere Bamba goes, he flashes the “Hook ’em” hand sign.

“I play around with people and kind of mix it up,” Bamba said. “They say, ‘Do you play basketball?’ No, I fence. I play croquet, I golf. I said volleyball a couple of times.

“Actually, since I’ve gotten to Texas, I became more of a football and volleyball fan,” he added. “Our volleyball team is really good. They’re top-five in the country, and they’re really good. Everyone’s crazy about our football team.

“Part of the reason why I watch the football and volleyball team so close is that they have these freshmen who are coming in and playing such huge roles. It’s something I’m going to have to do, and I talk to them and pick their brain about how to deal with expectations.”

The post Like most Texas fans, Mo Bamba now a member of the Sam Ehlinger fan club appeared first on Hook ‘Em.