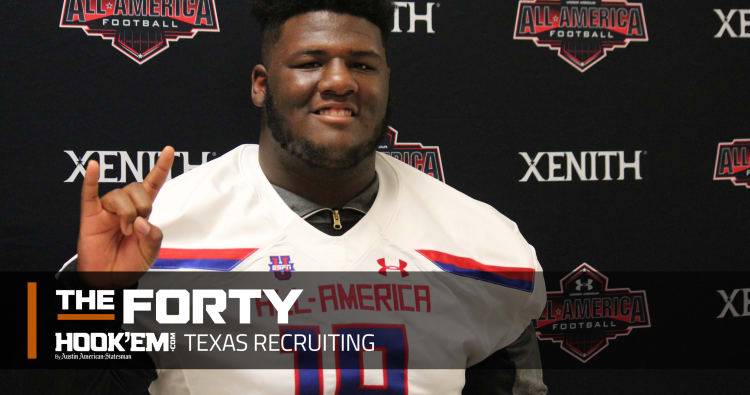 Most of us watched the damage of Hurricane Harvey on the news. Not Keondre Coburn. The 4-star defensive tackle from Spring Westfield was forced to watch the flood waters reach his home and eventually force his evacuation. The trauma is evident when Coburn talks.

“It was a challenge for me to go through the hurricane and get displaced,” Coburn said Monday at Westfield before accepting his jersey for the Under Armour All-America Game in Orlando on Jan. 4. “We missed school, and then all of the small stuff like if the house would be OK, the car and all of our stuff.”

Y’all pray for me pic.twitter.com/nhq6DJTYQh

Texas’ lone defensive line commit for 2018 is happy to be back on the football field. He’s welcomed the normalcy, and the challenge to lead Westfield toward a state title.

“This team was a family before, but it all grew more after the hurricane. It brought this community closer together and it brought our team closer together,” he said. “It’s been a release for a lot of us and we’re playing great football.”

Coburn is averaging more than six tackles a game from his defensive tackle position. Westfield is 6-0 entering the Week 9 matchup against Aldine on Saturday. Three wins away from another district championship, Coburn notes his hunger for the game grew after what he went through with the flooding.

“I always thought I loved the game, but I realized how much it means to me now. Going through all of that was hard, but it showed me I can get through anything and it showed me what is important to me,” Coburn said. “Not everyone is in this position and that’s a blessing. We’re lucky to be here and that we are alive.”

Like most invested in Texas football, Coburn has watched the Longhorns start 3-4. Coburn committed on Aug. 7. The 6-1, 329-pound prospect is the No. 10-ranked member on the Fabulous 55 and a top 100 recruit in the nation, per the 247Sports composite.

“The team isn’t doing great right now, but you know there are players on the roster right now that will help Texas in the future,” Coburn said. “We have a quarterback and Sam Ehlinger is one of the best quarterbacks in the country and the offensive line is injured. Defensive-wise, Texas needs help up front and I feel like I can come in and help at multiple positions along the defensive line.”

The Longhorns lose a commitment

Texas’ 2018 class is back to 18 members following the de-commitment of JUCO tight end Dominick Wood-Anderson. The Longhorns still hold a commitment from one tight end in the class with 4-star Malcolm Epps of Spring Dekaney still in the fold. Epps will be awarded his Under Armour All-America Game jersey today at 11:45 a.m.

The Longhorns aren’t out of it for Wood-Anderson, but players rarely end up committing to a program twice. The 3-star from Arizona Western College is the No. 1-ranked JUCO tight end in the country. He was offered by Oklahoma on Oct. 3.

Expect Texas’ staff to continue to recruit him while also exploring options at the prep and JUCO levels. The Longhorns need depth at tight end with freshman Cade Brewer currently taking most of the snaps. Wood-Anderson was to add immediate depth because of his age and experience.

Mustapha Muhammad, a 4-star tight end from Fort Bend Ridge Point who holds a UT offer and is the top-ranked tight end on the Fab 55, committed to Michigan before his game last Friday. Texas will continue to recruit him until national signing day.