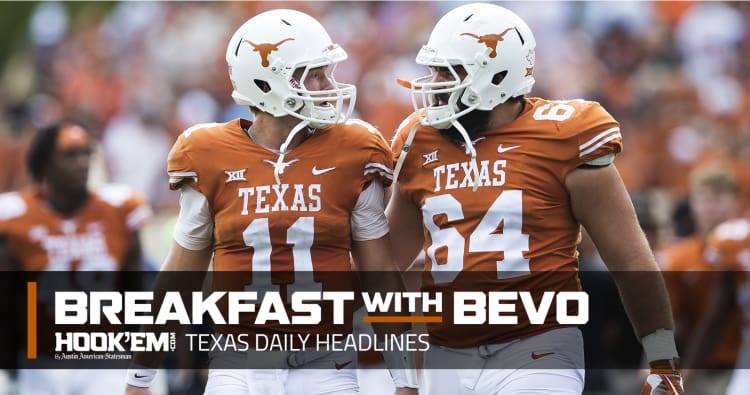 Read before you answer

When it comes to Texas football history, American-Statesman columnist Kirk Bohls knows better than just about anybody. So when he poses a question like the one that topped his Monday “True or false” column about the 2017 Longhorns, it is with careful thought. The worst offensive line in school history? It’s worth considering, as are the other nine topics Bohls touched on. Give it a read, over at HookemPlus.com.

Texas confirmed Monday that quarterback Sam Ehlinger was evaluated for concussion symptoms following the loss to Oklahoma State, and must clear concussion protocol in order to play Saturday against Baylor. The injury to Ehlinger means sophomore Shane Buechele will be back behind center as the Longhorns prepare to head to Waco. It also means wide receiver Jerrod Heard will have to prepare to play some quarterback in an emergency.

Texas got some bad news on the recruiting trail Monday evening, as the nation’s top junior college tight end announced his decision to de-commit. Dominick Wood-Anderson, a 6-foot-5 target from Arizona Western, made the announcement via Twitter. For many other recruits, Hookem.com recruiting reporter Mike Craven writes that losses on the field haven’t deterred them. Also, 5-star cornerback Anthony Cook has announced a new decision date.

The semifinalists for the Jim Thorpe Award have been announced, and Texas safety DeShon Elliott made the list. The Rockwall native is one of 13 players who have moved one step closer to being named the nation’s top defensive back. Elliott is one of four FBS players with 5 interceptions, and he also has 32 tackles so far this season.