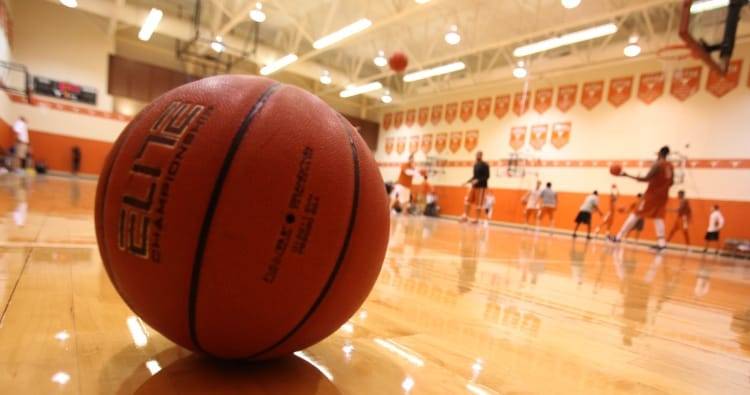 HOUSTON — This was supposed to be an exhibition game, nothing more than a feel-good moment to help raise money for Harvey relief efforts.

But this is Texas vs. Texas A&M. Once the ball was thrown up in the air, forget it.

The Longhorns and Aggies went at each other Wednesday night in Rice’s Tudor Fieldhouse in a 40-minute affair that had all the intensity of March madness. Texas captured a 73-69 win that counts only in the memory bank.

The Longhorns led by double digits in the first half, but the Aggies got within four down the stretch. Andrew Jones hit two free throws with 2:25 remaining to give UT a 71-66 cushion. But the Aggies kept coming, eventually making it a one-possession game.

In the final minute, A&M’s Tyler Davis tried a spin move and wanted to score down low. But UT freshman Mo Bamba came from across the lane and got a monster block with 12 seconds remaining. That was all the Horns would need to escape what was a pro-A&M crowd.

The official game ball goes to everyone associated with pulling this event together on such short notice. A&M coach Billy Kennedy first reached out to Texas’ Shaka Smart and broached the topic. School officials took it from there and obtained a waiver from the NCAA to hold the exhibition game.

Rice officials should take a bow for opening their facility and putting their event management staff to work. It was supposed to be their off night. Rice folks could’ve been home watching the Astros in the World Series.

The Aggies were the third-best shooting team in the SEC last season, hitting 45.8 percent of their shots. They couldn’t get much going in the first half against the long-armed Longhorns. Freshman Jericho Sims, known around Cooley Pavilion for being ultra quiet, spoke volumes with his athleticism. He had three of UT’s seven blocks in the first half as A&M shot 25 percent overall in the first 20 minutes.

At Big 12 media day in Kansas City, Smart was asked if the team’s shooting numbers would be better. “It better be,” he said. There was lots to like. Andrew Jones hit back-to-back 3-pointers. Eric Davis hit two and Jacob Young hit two more in back-to-back fashion in the second half.

Smart will fall out of his chair when he sees the offensive rebounding totals. The Aggies had 20 offensive boards with 9 minutes remaining compared to the Longhorns’ four. Now, it should be said that Texas’ defense was a big reason why A&M missed a ton of shots. Still, that’s a lot of second chances to allow.

Texas has two of the so-called “secret” scrimmages in the coming weeks against SMU and LSU. They’re called “secret” because NCAA rules prevent the school from promoting either exhibition event. It’s a chance for coaches to set up specific game situations in an empty gym against someone in another colored jersey.