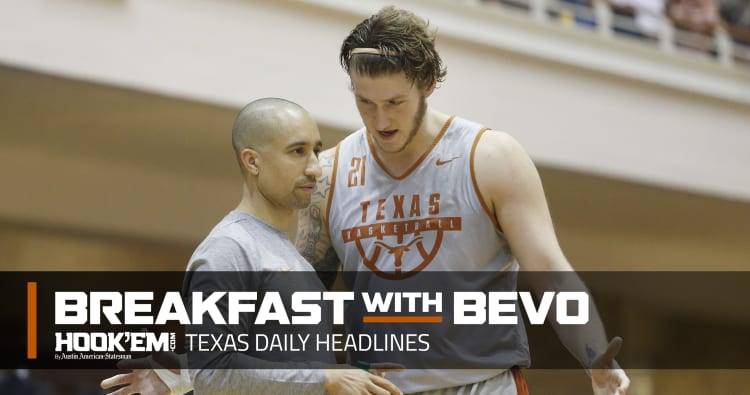 Texas beat writer Brian Davis was at the conference’s media day Tuesday and there was plenty to talk about. An FBI investigation lingers, the Horned Frogs are a team to watch and the women’s tournament will move back to Kansas City in 2020. Those and other notes can be found here in Davis’ coverage.

At media day Texas basketball coach Shaka Smart said that renewing the rivalry between the Longhorns and Texas A&M Aggies on the basketball court was being discussed. Though nothing has been determined or finalized, it seems the two schools are warming to the idea of facing each other annually on the basketball court. The two teams will meet up Wednesday at Tudor Fieldhouse in Houston as they raise funds for Hurricane Harvey relief.

Mo Bamba, like most Texas fans, was heartbroken on the final play of Texas’ 13-10 overtime loss to Oklahoma State Saturday. He likes what he sees out of fellow freshman Sam Ehlinger, however. Bamba likes the way Ehlinger leads as a freshman. The freshman center is hopeful he can do the same for the Longhorns on the basketball court as he attempts to help turn the team around.

Dylan Osetkowski hoping to make a name for himself

Dylan Osetkowski isn’t the first name that comes to mind when thinking about the Longhorns basketball team. One likely first thinks of Bamba. Then the attention probably shifts to the veterans on the team. Osetkowski is looking to make an impact in his first year with the Longhorns, though. The forward transferred from Tulane and had to sit out last season. Osetkowski kept his mind and body focused on basketball, however, going through one-on-one workouts with the head coach.

Keondre Coburn is glad to be back to playing football after being displaced during Hurricane Harvey. The defensive tackle is the lone defensive lineman committed to play for UT in the 2018 class. He’s having success on the field despite a big distraction off it to start the season. Coburn likes some of the pieces the Longhorns have in place despite their 3-4 record. He looks to help along the defensive line next season.

The post Big 12 Media Day: Longhorns look to renew rivalry with Aggies on the hardwood appeared first on Hook ‘Em.

Longhorns in the NFL: Week 7 marked by defense and a big injury