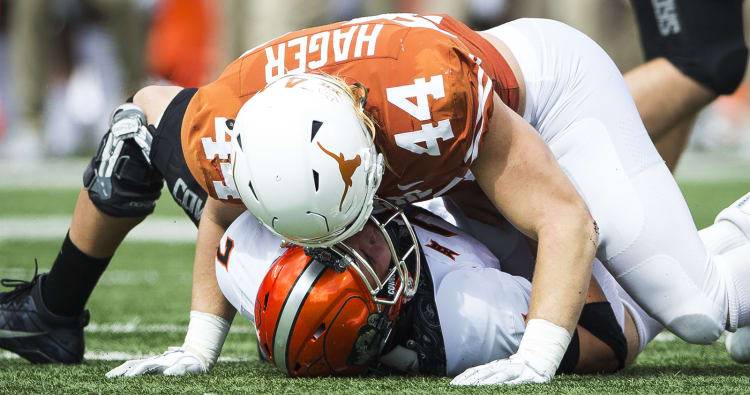 Texas junior Breckyn Hager told reporters on Tuesday that he doesn’t like to talk. He’d rather eat.

The metaphorical feast of choice for a defensive end, of course, features quarterbacks as entrees. Maybe a running back for a snack. It’s hard to eat, though, when you’re on the sidelines.

Hager, who started five games last year, was used in a complementary role through the first six games. Texas, however, unleashed him on Oklahoma State last week. He responded with two sacks in the overtime loss.

“It just felt good to be back,” said Hager, who has three sacks and seven tackles this season. “I don’t like to do a whole lot of talking. I was just excited to go out there and show them that if they give me this opportunity, I’m going to eat.”

Hager wasn’t the only Longhorn whose role has changed under a new coaching staff. In fact, the defense has six clearly-defined backups with at least five career starts.

Jason Hall, a senior safety with 28 starts under his belt, has been replaced by Thorpe Award semifinalist DeShon Elliott. But he contributed two tackles and a forced fumble on special teams.

John Bonney started seven games at cornerback last year. Texas struggled deciding whether Bonney was a safety or cornerback in the off-season, but he’s now listed as a safety, backin up Brandon Jones. Bonney also plays on special teams and is used as an additional defensive back in Texas’ dime package.

Texas ranks eighth nationally on third down defense, having stopped 71 of their opponents’ 97 third-down conversions. The Longhorns also have held on eight of nine fourth-down tries, a success rate bested by only San Diego State

After making stops on 71 of their opponents’ 97 tries, Texas ranks eighth nationally in third down defense. UT has held on eight of the nine fourth downs it has faced, a success rate bested by only San Diego State, which hasn’t allowed a fourth-down conversion all season. Bonney intercepted a fourth-down pass by Oklahoma quarterback Baker Mayfield, which was the Sooner’s first thrown pick of the season.

“I get super excited when our starting defense does really good on first down and gets the offense behind the chains, because I know I’m probably going to be getting in,” Bonney said. “I really cheer heard for those guys, and then when my number is called, I just try to go out there with my hair on fire.”

As with Bonney, Texas struggled with finding a role — and position — for Hager. Texas coach Tom Herman said UT couldn’t decide whether he was an outside linebacker or an inside linebacker or a defensive end. To start the season, Hager was primarily used as a pass-rushing linebacker in third-down situations.

Texas held Oklahoma State to a season-low 282 yards and no passing touchdowns on 38 pass attempts. Oklahoma State’s 13 points were its lowest scoring output since a 28-7 loss to the Longhorns in 2014.

“That was a really good scheme that worked for us against a team that throws it as much as they do,” said Herman, who added that Hager’s role will increase once he becomes more comfortable playing against the run.

The Whys of Texas: Universal praise for the defense; the offense, not so much

Gov. Greg Abbott: ‘My next goal as governor is to reunite the Texas-Texas A&M rivalry’