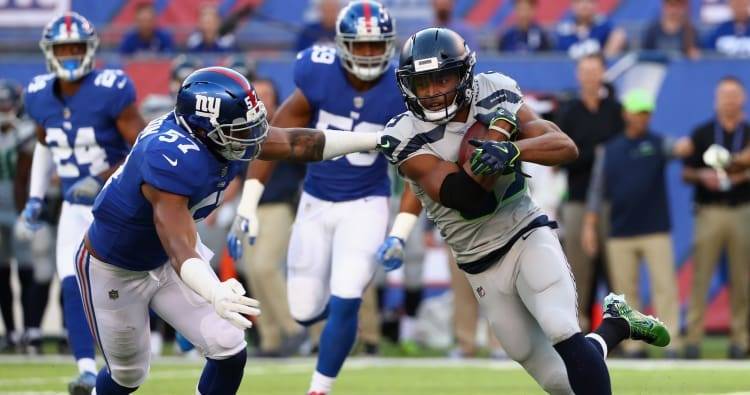 A week after forcing five turnovers, the Saints defense played well again on the way to a 26-17 win over the Packers. Kenny Vaccaro picked off a pass for the second week in a row to go along with four tackles. Alex Okafor also had four tackles and a sack in the win. Watch Okafor, signed as a free agent in the offseason, set the edge on this run play broken down by Brian Baldinger of NFL Network.

.@saints are playing nasty defense this season and it starts with the fundamentals in the trenches #BaldyBreakdowns pic.twitter.com/d33INOlJtk

Vaccaro pretty much sealed the win with this fourth-quarter pick.

Another top defender representing the Longhorns in the NFL is Jordan Hicks. He had quite a different experience than Vaccaro and Okafor this week. Hicks ruptured his Achilles on just the second play of the 34-24 win over Washington on Monday night. He was already dealing with an ankle injury, but now he’s out for the season. Hicks finishes the year with 28 tackles. It’s the second time in his three-year career that he’s been unable to complete the season.

Keenan Robinson, LB, Giants—Robinson had nine tackles to lead the Giants defense in the 24-7 loss to the Seahawks.

Adrian Phillips, CB, Chargers—Phillips made eight tackles in an impressive shutout of the Broncos, 21-0 on Sunday. He had a pass deflection and was second on the team in tackles.

Derrick Johnson, LB, Chiefs—Johnson and the Chiefs suffered their second setback in a row, falling to the Raiders 31-30 in a wild finish Thursday night. He finished with seven tackles, a tackle for loss and a pass deflection.

Brian Orakpo, LB, Titans—Orakpo made four tackles and registered a half sack in the 12-9 win over the Browns. He hit the quarterback three times.

Marquise Goodwin, WR, 49ers—Goodwin bounced back after a tough Week 6 by catching four passes for 80 yards to lead the 49ers. Unfortunately, his defense couldn’t do anything to stop the Cowboys offense on the way to falling 40-10.

Justin Tucker, K, Ravens—Tucker was once again perfect, going 3-for-3 on field goals and connecting on his lone extra point attempt. The Ravens fell 24-16 to the Vikings, however.

Sam Acho, LB, Bears—Acho had three tackles as the Bears put on a great defensive performance in the 17-3 win over the Panthers.

Nick Rose, K, Redskins—Rose was 1-for-1 in field goal attempts and made all three extra points in the loss to the Eagles. Rose was without a team until Thursday when he beat out other kickers to replace Dustin Hopkins.

Earl Thomas, S, Seahawks—Thomas and the Seahawks handled the Giants pretty easily. Thomas had two tackles in the 24-7 win.

Geoff Swaim, TE, Cowboys—Swaim made one catch on a seven-yard play off play action to help the Cowboys get a first down. The drive resulted in a touchdown on the way to the big win.

Malcom Brown, DT, Patriots—Brown had one tackle in the Patriots big 23-7 win over the Falcons. His defense has struggled but they came up big against the defending NFC champions.

Malcolm Brown, RB, Rams—He had one carry for seven yards in the 33-0 win over the Cardinals.

Hassan Ridgeway, DT, Colts—The defensive tackle made one tackle in the 27-0 loss to the Jaguars.

Phil Dawson, K, Cardinals—Dawson went 0-for-1 on field goal attempts as the Cardinals were shut out.

Marcus Johnson, WR, Eagles—Johnson failed to haul in any passes this week as he was targeted just once in the Eagles’ 34-24 win over Washington.

Colt McCoy, QB, Redskins—McCoy wasn’t called into action in the loss to the Eagles.

Roy Miller, DT, Chiefs—Miller didn’t record a stat in the Chiefs’ loss to the Raiders.

Fozzy Whittaker, RB, Panthers—Whittaker didn’t log a stat in the loss to the Bears.

Trey Hopkins, OG, Bengals—Hopkins played in 51 offensive snaps, but the Bengals struggled all day, falling 29-14 to the Steelers.

Brian Robison, DE, Vikings—Robison had three tackles and a sack in the Vikings 23-10 win over the Packers.

Quandre Diggs, CB, Lions—Diggs and the Lions were on bye in Week 7.

D’Onta Foreman, RB, Texans—Foreman and the Texans were on bye in Week 7.

Lamarr Houston, LB, Texans—Houston and the Texans were on bye in Week 7.

The post Longhorns in the NFL: Week 7 marked by defense and a big injury appeared first on Hook ‘Em.

Big 12 Media Day: Longhorns look to renew rivalry with Aggies on the hardwood