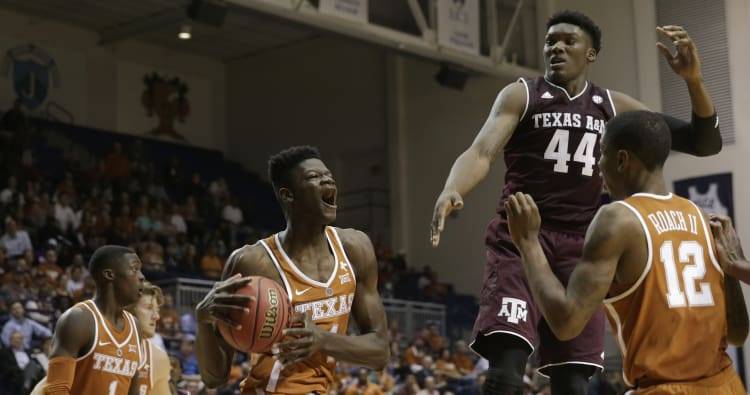 HOUSTON — Charity games are supposed to be fun-loving, family affairs where everybody has a good time.

Tell that to the Texas A&M students shouting and stomping inside Tudor Fieldhouse on Wednesday and screaming at the top of their lungs, “Beat the hell out of t.u.!”

No, this was not some sleepy exhibition played on the Rice campus. Sure, all proceeds went to Harvey relief efforts, and Gov. Greg Abbott was on hand to thank those who helped pull this thing off in less than a week.

But this was Texas vs. Texas A&M and all that implies. The Longhorns captured a 73-69 win in one of the most intense, spell-binding preseason games you’ll likely ever see.

And it didn’t even count! Yeah, sure. Tell than to the 2,048 in attendance, some of whom paid $1,000 just to sit courtside. This counted in everyone’s memory bank, all right, all while dumping money into the Rebuild Texas relief fund.

“Oh, I loved it. It wasn’t meaningless at all,” said UT freshman Mo Bamba, who had 15 points and 10 rebounds and two of the Horns’ seven blocks. “We approached this as if it was a real game, as if it was in the middle of the season.”

A&M coach Billy Kennedy just shook his head afterward. “First time I’ve ever coached a game this early that was that intense,” he said. “I’ve gotta give them credit. Thought they were really ready to play.”

From a basketball prospective, the Horns probably needed this more than the Aggies. Texas was 0-11 last season in road and neutral-site games. So for coach Shaka Smart’s club, watching a 15-point, second-half lead get chopped down to one with 4:29 remaining couldn’t have felt good.

But Andrew Jones and Dylan Osetkowski hit some big free throws down the stretch that were critical. Bamba harassed Tyler Davis into missing underneath with 12 seconds left and then hit a game-clinching free throw on the other end.

Texas is team full of newcomers that won in a hostile environment and enjoyed a celebratory bus ride back to Austin. There’s not a coach in the world who wouldn’t take that in late October.

“We were playing too much in the second half not to lose,” Smart said. “Too much prevent. But I did think in the last two or three minutes, our guys buckled down and tried to make some plays.”

A&M fans shouldn’t be disappointed. Kennedy’s got a solid ballclub, although one that missed a too many shots (20 for 66, 30.3 percent) on this night. Tonny Trocha-Morelos had a game-high 19 points while Davis added 16 more. Those two alone make up an intimidating frontcourt with sure-fire NBA potential.

Everyone in the SEC will have to account for Robert Williams, the 6-foot-10 behemoth who could be a top-10 lottery pick next summer. He finished with 11 points and 15 rebounds going head to head against Bamba and Osetkowski.

The Longhorns believe they can shoot better these days and it showed. Texas made only seven of 23 from 3-point range but shot 51.1 percent overall. Andrew Jones had a team-high 18 points. Jones, Eric Davis Jr. and Jacob Young all connected twice from beyond the arc.

Smart winced at the offensive rebounding totals. A&M had 20 compared to UT’s six. His team also missed 10 free throws. “So there’s a lot of areas we can grow, but that’s a good thing,” Smart said. “A&M’s a really good team.”

School officials weren’t quite sure how much was raised for Harvey relief. But at least one Longhorn was quite thankful. Kerwin Roach Jr., a native Houstonian, started the post-game press conference by saying, “I just want to thank everybody for coming out. this game really means a lot to me and my city.

“There’s a lot of families out there that was affected by the storm, including mine,” Roach said. “So this game means a lot. It means more than basketball to me.”

Abbott, wearing an Astros jersey, watched the entire first half and the start of the second. His office was instrumental in helping this all come together. Most agreed that Rice officials deserve full applause for lending their facility and manpower on a night they could’ve been home watching Game 2 the World Series.

Maybe a higher power will help these two flagship schools restart the rivalry. It certainly looked intense in the second quarter when things got chippy and officials had to step in.

“When it got close, you could hear the screams,” Jones said. “It felt like a great college atmosphere.”

So can Abbott pull off another miracle and get Texas to play A&M in football someday?

“My next goal as governor is to reunite the Texas-Texas A&M rivalry,” Abbott said. “Hook ’em  Horns!”