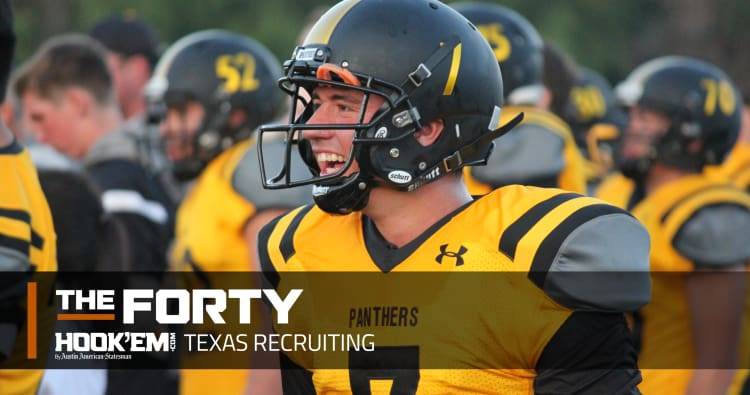 There are two concerns for Texas fans — the results on the field and the momentum in recruiting. A 3-4 start creates anxiety on the recruiting trail and that was heightened Monday afternoon when JUCO tight end Dominick Wood-Anderson de-committed from the Longhorns.

De-commitments happen in recruiting cycles, especially with out-of-state prospects. Wood-Anderson is a JUCO product who wants to win right now. The Longhorns shouldn’t panic until an in-state kid jumps ship.

One of the big question marks in this recruiting class is keeping both quarterbacks committed. Casey Thompson, a 4-star from Oklahoma, and Cameron Rising, a 4-star from California, are two of the 18 athletes committed to Texas and two of the four remaining out-of-state commitments. Rising took his official visit to Texas to watch the Oklahoma State game last Saturday.

“It was an awesome visit,” Rising said by phone Monday night. “I’d say each bit of the trip was perfect except for the loss. The city of Austin is great, the atmosphere at the game was unbelievable and I can’t wait to get on campus.”

Rising will graduate early and enroll at Texas this spring, if all goes to plan on national signing day. He’ll sign on the newly formed first signing day in December.

The slow start hasn’t made Rising waiver — yet. He sees signs pointing to a bright future at Texas.

“As a quarterback, it is great to see the defense playing like it is against great quarterbacks like Mason Rudolph, Sam Darnold and Baker Mayfield,” he said. “I want to play for a defense like that because that is the type of defense that will win a championship once the offense improves. It is tough on the offense right now because of all the injuries on the offensive line. That’s part of the reason Texas is struggling on offense.”

Rising not afraid of looming competition

The elephant in the room for Rising is Sam Ehlinger, Texas’ freshman starter. A true freshman at the helm would give most prep quarterbacks pause. The goal for these elite players is to reach the NFL and that rarely happens from the sideline, especially with quarterback being a position without much of a rotation.

Both Rising and Thompson risk arriving on campus and watching Ehlinger lead the Longhorns for the next three seasons. Even with a redshirt, that means Rising might not see the playing field as a starter until his redshirt sophomore season unless Ehlinger gets hurt, loses the job or leaves early for the NFL.

Rising sees a quicker way to become the starter at Texas and Tom Herman told him Saturday that he’ll get every opportunity to earn the starting job as a true freshman, just like Ehlinger eventually did this season.

“I don’t look at Sam being a freshman as a problem,” Rising said. “Sam is doing a great job, but I saw a lot of mistakes and a lot of plays left on the field by the offense. Coach Herman says it is an open competition, period, and that the best player will play. I’m going to come in and compete.”

On his visit, Rising took time to hang out with the other prospects on visits, specifically wide receiver commit Rondale Moore of Kentucky. Both are out-of-state commits and Rising wants to build a relationship with his future teammates if possible.

“It is always easier to get to know people in person,” he said. “I tried to talk to as many people as I could and let them get a feel for my personality and who I am as a quarterback, a person and hopefully a leader. I want to see this class stay together.”

Rising was hosted by freshmen Max Cummins and Jordan Pouncey.

“Austin really is an amazing city,” he said. “There isn’t a shortage of things to do. We stayed near the Barton Creek area and I was able to get a taste of 6th Street. It’s cool learning the city more each visit.”

Focusing on his senior season

Rising is sympathetic to the plight of Texas in 2017 because it mirrors his Newbury Park (Calif.) program this season. Injuries decimated the Panthers early in the year and the team is 4-4 heading into the final two weeks of the regular season.

“It’s been tough because of all the injuries. It’s hard to build a rhythm as an offense or a team during the week with guys out for practice and games,” Rising said. “We’ve done well given the circumstances. It’s been fun to watch other guys step up in place of expected starters.”

Rising is no stranger to injury. He missed most of his junior year with a shoulder injury. Through eight games, he’s thrown for 1,374 yards and 12 touchdowns and four interceptions. He’s completed 56 percent of his passes. On the ground, he’s added 431 yards and nine touchdowns.

“I don’t believe in labels like pro-style or dual-threat quarterback,” he said. “It is the quarterback’s job to make the right play whether that is with your arm or your legs.”

Big 12 Media Day: Longhorns look to renew rivalry with Aggies on the hardwood

College football coach salaries are out, and Tom Herman is in top 10