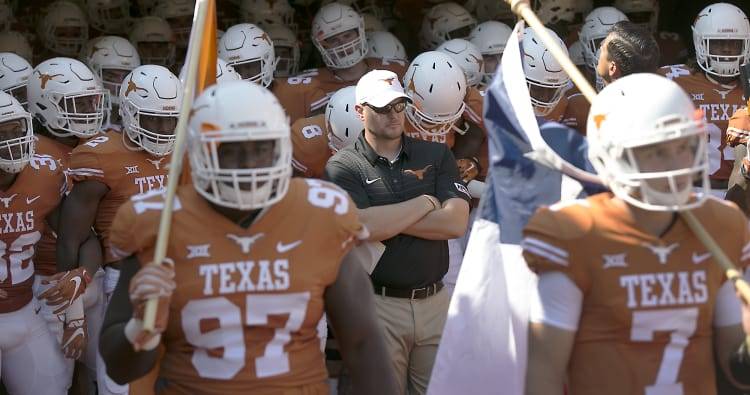 The Big 12 unveiled the 2018 conference football schedule on Thursday, and most of it looked normal.

Texas opens at home against TCU on Sept. 22. The Oklahoma game will be the first weekend in October. And November looks fairly light, especially since West Virginia comes to Austin.

But the final game triggered alarms.

Texas will not play at home on Thanksgiving weekend in 2018, going to Kansas instead for a game on Friday, Nov. 23. It will be UT’s first Thanksgiving road trip to somewhere other than College Station since 1994 and the first holiday weekend out-of-state road trip in school history. Is the Thanksgiving tradition now dead?

“I liked the game,” UT coach Tom Herman said after Thursday’s practice. “It was great for our fans and great for us, especially with the A&M rivalry not being played anymore.

“Yeah, I’m sure at some point, somebody will explain to me why, and I’m sure there’s good reason for it,” the coach added. “But I haven’t been told one way or the other if it’s permanent or not.”

Texas men’s Athletic Director Mike Perrin said his department had no opposition to the schedule. School officials are given the schedule long before it’s made public to look things over and digest the results.

“Our charge from the athletic directors is to annually build the best possible football schedule, given parameters of what we have to deliver to our television partners and the respective teams,” Big 12 spokesman Bob Burda said. “It was our thought this was the best possible schedule, and that’s why it was released as such.”

However, the series was halted after the 2011 season when the Aggies left the Big 12 and joined the Southeastern Conference. Texas officials convinced Texas Tech and TCU to serve as the visitor at Royal-Memorial Stadium from 2012-16 on the holiday weekend.

If UT officials ingested truth serum, they’d probably tell you that hosting a game on Thanksgiving weekend had become a drag. It was vastly different when A&M came to town every other year. The Red Raiders and Horned Frogs simply don’t generate the same buzz. TCU is also 3-0 against UT in Austin since 2012.

The dynamics have changed now that the Big 12 has restarted the league championship game. Few coaches may want to play a mega-matchup the week before the Big 12 title game on the first Saturday of December.

The post Holiday road: Big 12 sending Texas to play at Kansas on Thanksgiving weekend in 2018 appeared first on Hook ‘Em.

The Week 9 guide to watching Texas commits in action