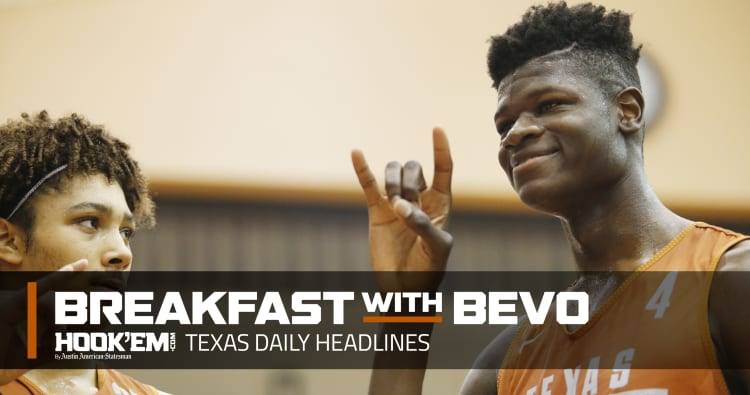 Mo Bamba scored 15 points and hauled in 10 rebounds while Andrew Jones led the Longhorns with 18 points to lift Texas to a 73-69 win over the Texas A&M Aggies Wednesday night in Houston. The exhibition game was held at Rice University in an effort to raise funds for Hurricane Harvey relief.

Austin American-Statesman columnist Cedric Golden talks about how it’s must-win time for Tom Herman as he faces Baylor on Saturday. A win keeps the season from falling off the rails, a loss puts a bowl game in serious jeopardy for the Horns.

Before the Longhorns and Aggies faced off on the basketball court in a charity event to raise funds for Hurricane Harvey relief, Gov. Greg Abbott told reporters his next goal as governor was to reunite the Texas-Texas A&M rivalry. The governor’s staff helped organize the exhibition contest held at Rice University Wednesday.

Breckyn Hager and John Bonney have started for Texas in the past, but with a new coaching staff things have changed to start the season. Now the two are settling into roles that they can excel at coming off the bench.

The Whys of Texas: Praise for defense, critiques of offense

Texas beat writer Brian Davis didn’t have to ask readers what they thought of last weekend’s game for this edition of The Whys of Texas. While there was praise for the defense, the focus was on the offense, or lack thereof. Questions about creativity, willingness to run the ball and even artificial turf were asked. To be sure, there’s much concern among the fan base regarding where this offense is going.

An ‘awesome’ visit for quarterback committed to Texas

Cameron Rising took his official visit to Texas last Saturday and said it was a perfect trip, except for the loss, of course. Rising is a 4-star recruit from California and is one of two quarterbacks committed to play for Texas in the Class of 2018. He’s not discouraged by competition or the fact that a freshman is starting for Texas right now. Herman told him the best player will play, the high school senior said.

The post Longhorns and Aggies face off on court as governor calls for same on gridiron appeared first on Hook ‘Em.