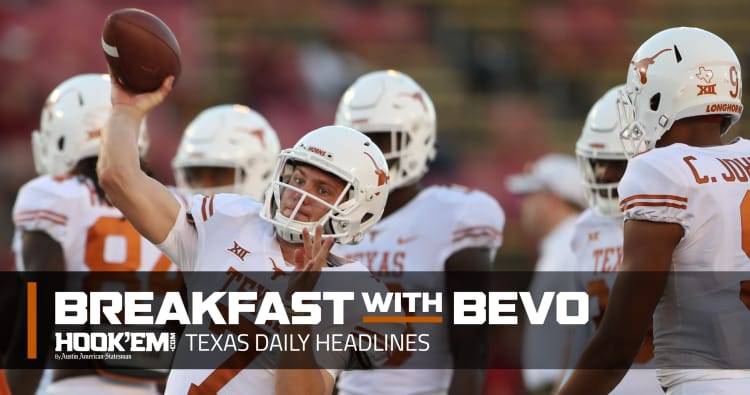 Shane Buechele to start against Baylor

Tom Herman said Thursday that Shane Buechele will start at quarterback in place of Sam Ehlinger against Baylor. With Buechele’s injury history, it will be interesting to see who will back him up. Ehlinger is going through the concussion protocol and Jerrod Heard is the only other viable option.

The Longhorns football team announced its complete 2018 schedule Thursday. Texas will travel to Maryland to face the Terps on Sept. 1 to start the season. They’ll host three straight games, including contests with Southern California and TCU, before traveling to face Kansas State on Sept. 29. The Longhorns will take on Oklahoma in the first weekend of October. Texas will close out the season with a road game to somewhere other than College Station for the first time since 1994 when they play Kansas on Nov. 23.

There was a big hole in the student section last week as the Longhorns fell to Oklahoma State. It turns out that the reason is a little more complicated than just student apathy and a losing season.

American-Statesman columnists Kirk Bohls and Cedric Golden talk Texas offense and are joined by Waco Tribune-Herald sports editor Brice Cherry. Bohls and Golden debate whether or not Texas offensive coordinator Tim Beck is doing a good job. They turn their attention to Baylor when they talk with Cherry about the Bears’ 0-7 start.

Jalen Green and Byron Hobbs are battling injuries, but all other in-state recruits committed to Texas will be in action this weekend. Recruiting writer for Hookem.com Mike Craven offers up this week’s guide to tracking these high school stars around the state and beyond.

Olivia Thompson, a sophomore cross-country runner, will compete at the Big 12 meet on Saturday. She’s hoping for a top-30 finish at her first conference meet. Along with a hair tie to keep her hair up, onlookers may notice her pink hearing aids. She was born with a hearing impairment but doesn’t let it slow her down.

The post Shane Buechele to start at QB against Baylor; Texas traveling Thanksgiving weekend in 2018 appeared first on Hook ‘Em.