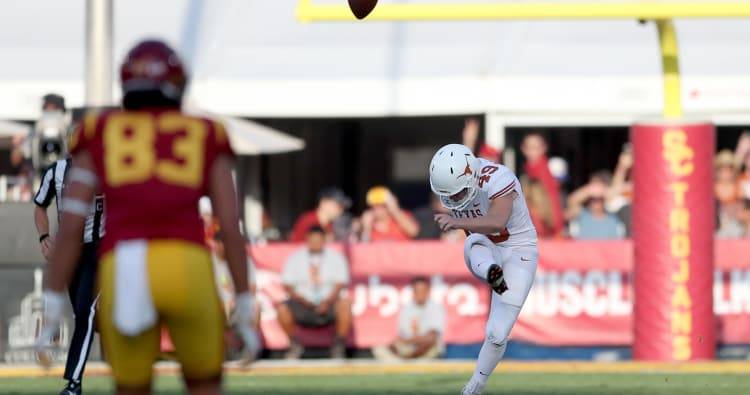 This week’s notable number is 17.

The No. 17 is worn by freshman receiver Reggie Hemphill-Mapps, who leads the team with 31 receptions. Junior linebacker Gary Johnson picked up eight of this season’s 17 tackles last week against Oklahoma State. UT hasn’t been shut out in its last 17 conference games, and the Longhorns have averaged 28.6 points per game in those Big 12 contests.

Texas is scoring 30.3 points per game, so Rowland has had plenty of chances to show off his right leg. The Mississippi Gulf Coast Community College transfer has kicked off 36 times. Seventeen of those were touchbacks.

Rowland is nowhere near the top of the NCAA’s touchback tracker. In fact, he ranks in a tie for 61st nationally. Auburn senior Daniel Carlson has 49 touchbacks on 58 attempts. Oklahoma junior Austin Seibert’s 42 touchbacks are the third-most among FBS-level kickers and most in the Big 12.

Rowland’s touchback rate sits at 47.2 percent, but that number has improved over the last four games. Over Texas’ first three games, 15 of Rowland’s 19 kickoffs were returned. Over the past four contests, Rowland has been 13-for-17 in touchback conversions.

On Thursday, Texas coach Tom Herman explained that Rowland’s leg hadn’t magically gained strength. At the beginning of the year, Texas tried to kick it just short of the goal line and let its coverage team tackle the returner inside the 15. That plan, however, didn’t work.

Opponents opened drives inside their own 20 on only three of those 15 non-touchbacks in the first three games. Six returns reached the 30. (A touchback on kickoffs places the football on the 25).

“When he was doing that, the hang time wasn’t great and was kind of spraying the ball all around and so we said, hey man, just cut it loose,” said Herman, who added that the key to kicking it short of a touchback was a hang time of at least 4.5 seconds. “When he does, barring a big gust of wind, he’s pretty good at putting it through the end zone.”

When opponents have gotten a chance to return Rowland’s kicks — or Michael Dickson’s punts — Texas has relied on a mix of newcomers and veterans to make tackles. Freshmen Josh Thompson and Marqez Bimage lead the team with their five and four special teams stops. Among the Longhorns with three tackles on special teams are starters Malik Jefferson and Brandon Jones.

Texas junior John Bonney has three tackles on special teams. Bonney, a one-time starter who has transitioned into a reserve role on defense, said Herman and special teams coordinator Craig Naivar “take an immense amount of pride in special teams.”

“Coach Naivar tells us, and he’s serious about it, if you’re tired or something, you don’t take a rep off on special teams. You’re going to take our rep off on defense,” Bonney said. “Special teams is a major, major factor.”

The Eyes of Texas: 3 Bears the Horns will be watching