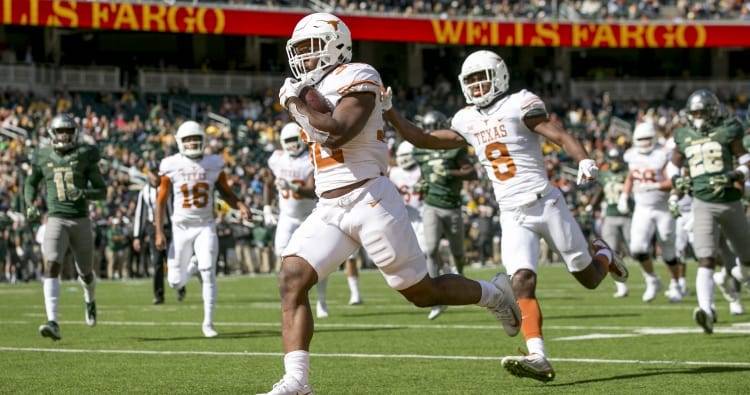 WACO — There were 146 snaps taken in Texas’ 38-7 win over Baylor on Saturday. Here are five that ended up making a big difference:

1. Defense does it again

Texas took a lead it wouldn’t relinquish on the game’s third play, but its offense was standing on the sidelines at the time. Junior safety DeShon Elliott intercepted a deflected pass thrown by Baylor’s Zach Smith. He then returned the turnover 43 yards for a touchdown.

Deshon Elliott’s celebration after big plays is contagious. Malcolm Roach wanted to be a part of it after Elliott’s pick 6 at Baylor. pic.twitter.com/XYan0ei7pe

With six interceptions, Elliott is two shy of tying the record that Earl Thomas set in 2009. With 127 return yards, he needs 34 yards to break Jack Crain’s 1940 record of 160 yards off of interceptions. The interception-turned-touchdown was also Elliott’s second of the season; both he and Hill (who also had a pick-six against San Jose State) have at least four games to separate themselves from UT’s eight-way tie for that record.

Elliott, by the way, entered this season with three career interceptions.

When Texas’ offense finally took the field, it did so with Armanti Foreman. UT’s first play was also a four-yard reception logged by the senior receiver.

The team’s leader in receptions and receiving yards last year, Foreman hadn’t played an offensive snap in any of UT’s previous three games. Texas coach Tom Herman had chalked up the benching to Foreman’s practice habits and the emergence at slot receiver of Jerrod Heard and Reggie Hemphill-Mapps.

UT coaches had hinted that Foreman could play against Baylor. Hemphill-Mapps, after all, was limited throughout the week by a sprained knee. Heard had to act as a back-up quarterback with Sam Ehlinger sidelined by a concussion.

Foreman caught two footballs on Saturday. His 19 receptions this fall rank fourth on his team. Foreman remains the only Longhorn with more than one touchdown catch.

3. Who is Texas’ mobile quarterback?

In his first start since a 17-7 win at Iowa State on Sept. 28, sophomore Shane Buechele threw for 256 yards, a touchdown and an interception. He also ran for a 28-yard score. That uncontested touchdown run gave Texas a 21-7 lead with 3:51 left in the first half.

The scoring run was the longest in the two-year collegiate career of Buechele, who has 136 rushing attempts to his credit. Herman said Buechele isn’t fully healed from the ankle injury he suffered against Iowa State, but the quarterback ran nine times for 42 yards on Saturday.

“He’s not a statue by any stretch of the imagination,” Herman said. “He’s not quite the runner that Sam is, but he is definitely serviceable.”

Texas took a 24-7 lead in the third quarter when kicker Joshua Rowland chipped in an 18-yard field goal. Given Herman’s admitted disdain for short field goals, not going for it on fourth down from the Baylor 1 raised some eyebrows. The coach, though, justified his decision by saying he wanted to make it a three-possession game.

Herman is seemingly in a no-win situation on fourth downs. Rowland had a 27-yard attempt blocked in the first quarter, and the junior is 7-for-13 on this year’s three-point attempts.

Additionally, Texas failed on both its fourth-down conversions against Baylor. UT is now a putrid 6-for-17 on fourth-down tries. The .353 success rate ranks 110th nationally. UConn has also failed on 11 of its 17 attempts.

Texas freshman running back Daniel Young picked up the first touchdown run of his career on a 31-yard run. That touchdown capped a 60-yard day for Young, a three-star signee from Spring Westfield High.

Young’s touchdown was essentially inconsequential, pushing UT’s lead to 38-7 with 1:57 remaining. It may have signaled a shift in Texas’ backfield plans, however.

Young and fellow freshman Toneil Carter accounted for 88 percent of Texas’ non-quarterback rushing attempts on Saturday. Veteran Chris Warren III had only two carries, and sophomore Kyle Porter did not touch the football. Carter led all players with his 70 yards, and both freshmen scored in the fourth quarter.

With Todd Orlando’s defense, 4-4 Texas can win every game left on its schedule