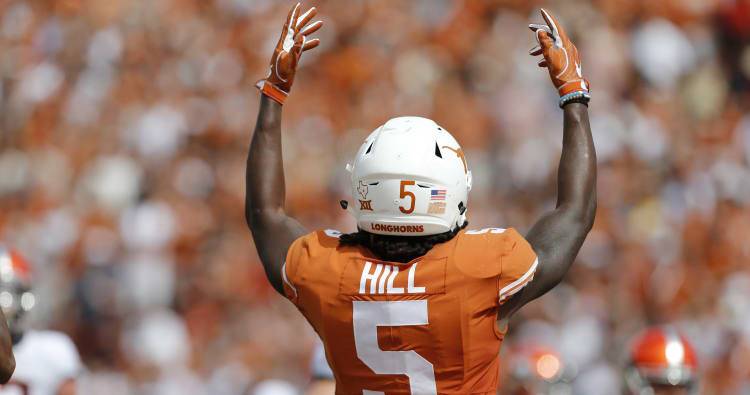 By this time next season, three current Texas Longhorns may very well be playing football for a paycheck.

Entering the season, it was widely expected that left tackle Connor Williams and linebacker Malik Jefferson would spend the 2017 season as their third and final effort among the college ranks. That still proves true, and another standout junior has joined the mix behind the strength of a dominant season of his own — cornerback Holton Hill.

The proof is in the projections, and as detailed in Bleacher Report draft scout Matt Miller’s latest NFL Mock Draft, three current Longhorns are in position to not only hear their names called during the 2018 NFL Draft, but can expect to be off the big board by the end of the 1st round.

Connor Williams, Junior LT, No. 5 to the Tampa Bay Buccaneers

Not surprisingly, Williams is the headliner of the bunch, projected as the No. 5 pick and the first Big 12 player drafted.

“Securing the left tackle position and giving Jameis Winston a potentially elite blindside protector would vastly improve this offense. There are too many instances of Winston having no time to make use of his wonderful offensive weapons. Williams changes that.”

A former 3-star recruit, Williams blossomed into a star at Texas in short order and as evident by his projected draft position, he’s seen as a franchise building block at left tackle. Williams did go down early in the season, though, suffering a sprained MCL ad PCL and a torn meniscus in his left knee against USC, but his long-term upside and NFL Draft hype remains.

Holton Hill, Junior CB, No. 19 to the Dallas Cowboys

Hill was expected (and quite simply, required) to take another step forward as a junior, but who truly foresaw such a substantial jump to elite status?

Suddenly, Hill has emerged as a lockdown cornerback and sure tackler on the perimeter and his confidence has radiated throughout a Texas defense that’s overwhelmed explosive offenses throughout the season.

“The 6’3″, 200-pound junior cornerback has eye-popping tools and traits. Hill’s arm length, toughness as a tackler and 4.5 speed might just remind you of a young Richard Sherman.”

Hill currently ranks second on the team with 47 tackles and 2 interceptions; both of which were returned for touchdowns. The junior has also defended 3 passes and forced 2 fumbles.

Even dating back to his time as a 5-star All-American recruit, it was nearly a foregone conclusion that Jefferson would spend only three seasons in Austin.

Considering the hype, Jefferson’s first two seasons under Charlie Strong were a bit of a disappointment, but the NFL hype persisted, thanks in large part to his sheer athleticism and seemingly endless upside. Now a junior in Todd Orlando’s defensive free-flowing defensive scheme, Jefferson looks every bit the part of the NFL prospect he’s long been projected to become.

“Jefferson has been misused at Texas when he’s asked to play a true middle linebacker position. His tools and skillset look more like that of a weak-side linebacker who can drop into coverage, rush the quarterback and make plays in the backfield against the run.”

Through eight games, Jefferson leads the Longhorns across the board with 74 total tackles, 8.5 tackles for loss and 4.0 sacks.

The post Bleacher Report projects 3 Longhorns be be selected in 1st Round of 2018 NFL Draft appeared first on Hook ‘Em.