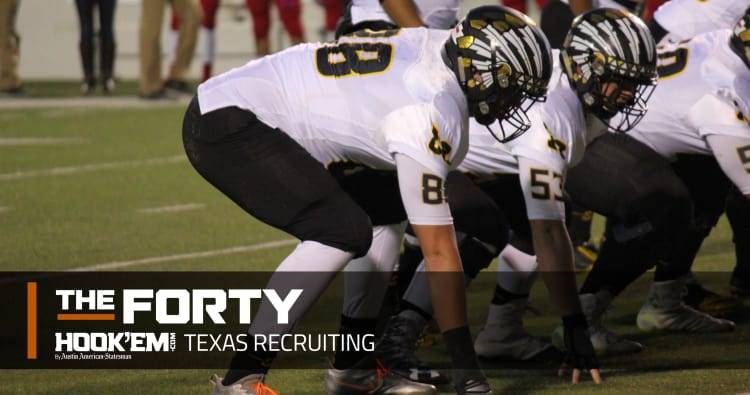 Reese Moore willing to wait his turn at Texas

Nobody familiar with the Texas football team is unaware of the issues along the offensive line. Injuries, and a couple of transfers, ravished the position unit early in the season and the Longhorns are still suffering through the effects on the field.

The Longhorns are starting a true freshman at offensive tackle in Derek Kerstetter, but 2018 commit Reese Moore is willing to wait his turn before making an impact for Texas. The current tight end will transition to tackle in college and a redshirt season is likely.

“Right now the plan is to stay healthy, gain good weight and be ready,” Moore said. “The redshirt has been thrown around and that is the plan right now, but as we’ve seen, anything can happen with injuries so I want to be ready for whatever the team needs.”

Moore has not wavered on his commitment. The 6-foot-6 prospect says he is up to 280 pounds and hopes to weigh 300 by the time he arrives on campus. Texas offensive line coach Derek Warehime has been instrumental in Moore’s continued commitment to Texas.

“He’s basically going to be my dad away from home,” Moore said about Warehime. “We talk about everything, not just football. I’ll be seven hours away, so I’ll be somewhat away from home and he’ll be my mentor for the next five years.”

Moore is set to sign with the Longhorns in the first national signing day period, which begins Dec. 20. The Longhorns hope to gather all of the commitments in the 2018 class on campus for official visits the weekend before, but Moore is hoping he can’t attend.

“The official visit date right now for the commits is December 16th weekend, which is the date of the state championships. My plan is to miss it because I’m still playing football,” he said. “If not, that is the week I’ll take my visit.”

Moore and his Seminole teammates suffered two defeats to Sweetwater in 2016, once in the regular season and once in the playoffs. Friday, in an overtime thriller, Moore and Seminole broke the streak and beat Sweetwater on the road, 28-27.

“It’s hard to explain how big of a win this is for people unfamiliar with West Texas football. It’s not easy to beat Sweetwater, especially in Sweetwater,” he said. “We knew if we wanted to win a district championship or go far in the playoffs, we’d need to beat this team.”

It’s likely the two will meet up again in the playoffs to decide the Class 4A Division II Region I championship. Seminole can clinch a district title with a home victory over Fort Stockton on Friday. The Indians have won eight straight games since falling to Class 5A Lubbock High in the season opener.

“That Week 1 loss was a humbling experience for us. At that time, we were ranked and we were big-headed,” Moore admitted. “That loss showed us we haven’t arrived and to treat every game like a championship game.”

The 5-star cornerback from Houston Lamar was set to announce his college choice today, but like we hinted at last week, Anthony Cook is still trying to decide between Texas, LSU and Ohio State. Cook is the top-rated uncommitted prospect left in Texas and is the top priority for the Longhorns.

For months Cook was leaning toward Ohio State. Texas gained the lead in the past month by appealing to his pride for the state and leaning on Texas commits, and Lamar teammates, Al’vonte Woodard and D’Shawn Jamison to stay in his ear about joining a class that’s ranked second in the country and first in the Big 12.

Recently, however, LSU has made a push by noting its pension for producing NFL cornerbacks and because of its projected depth chart at corner for the 2018 season. This news wasn’t unexpected and it shouldn’t be viewed as good news for any school.

No new decision date is set for Cook.