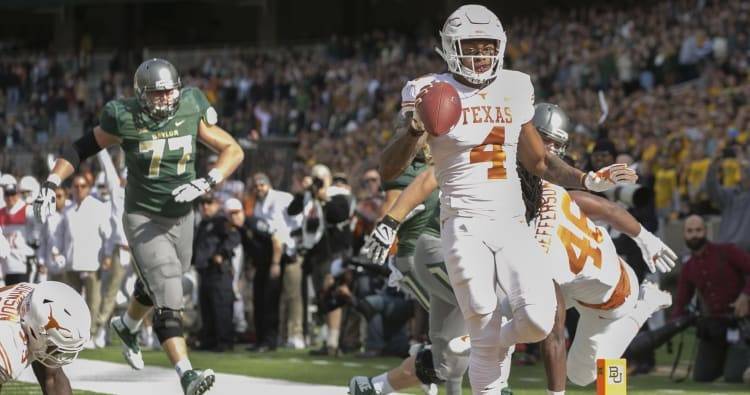 A pair of dominant displays during Texas’ 38-7 win over Baylor has earned two Longhorns some high praise.

After making their presences felt from the secondary and defensive trenches, respectively, safety DeShon Elliott and defensive end Breckyn Hager have been named to the Pro Football Focus Week 9 Big 12 Team of the Week, posting respective scores of 88.7 and 87.8

For the second week in a row, Breckyn Hager is the Big 12’s highest graded edge defender. pic.twitter.com/BSb7xc6VNL

As detailed by Pro Football Focus, Hager’s praiseworthy performance marks the second time in as many weeks that he’s graded out as the top edge rusher in the Big 12 after doing so last week following the Longhorns 13-10 overtime loss to Oklahoma State.

Elliott, on the other hand, bolstered his Jim Thorpe Award campaign and was honored accordingly.

Along with recording a team-high 8 tackles against Baylor, Elliott notched his sixth interception of the season and second pick-six on the Bears opening drive of the game. Elliott’s 6 interceptions currently headlines the entire nation. On the season, Elliott is up to 40 total tackles, 4.5 tackles for loss and 1.5 sacks. The junior safety has defended 3 passes, as well.

With No. 10 TCU next up on the schedule, it would be putting it lightly to say Texas would enjoy similar performances from its two standout defenders on Saturday.

Oklahoma strikes a blow against Texas with Ronnie Perkins’ commitment