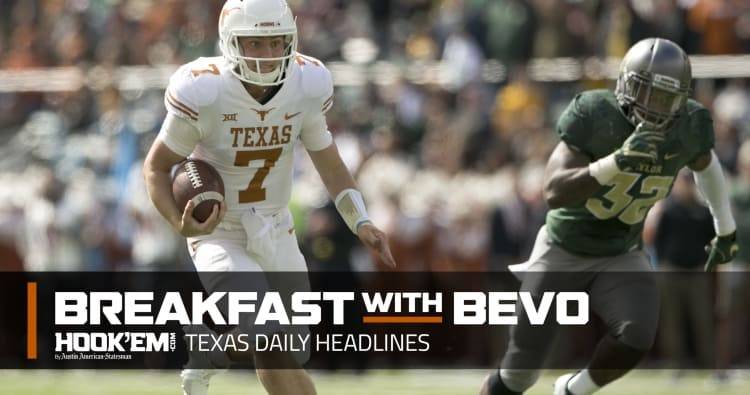 ‘Sunlight coming through’ for Texas offense

The balanced attack was there Saturday in the Baylor game. Texas was able to run the ball effectively with two freshmen running backs, and even Shane Buechele tacked on 42 yards on the ground to go with his 256 yards through the air. What’s next for the Texas offense? The Austin American-Statesman’s Kirk Bohls argues that keeping Buechele as his starting quarterback, offensive coordinator Tim Beck has a better chance of having a high-performing offense for the remaining four games on the schedule.

With Frogs as next opponent, Texas faces scary past

As focus turns to the opponent this week for the Longhorns — TCU — Texas players and coaches have to face the ugly truth of the past three games versus the Frogs. TCU won all three by a combined score of 129-26, highlighted by a 50-7 blowout in Cowtown in 2015 when Texas trailed 30-0 after 15 minutes of play.

During coach Tom Herman’s Monday press conference, he addressed squad injuries and noted that he could soon have his best player of the offensive side of the ball. Starting left tackle Connor Williams participated in on-field drills on Monday. The junior lineman hasn’t played since he sustained a knee injury at USC on Sept. 16.

Herman said the prospects of Williams returning next week for the home game against Kansas is “optimistic, and the following week might be a little bit more realistic.” Texas travels to West Virginia on Nov. 18 before closing out the regular season against Texas Tech on Nov. 24.

After so far totaling 76 tackles and 8.5 tackles for loss, both team highs, Malik Jefferson was named a Butkus Award semifinalist on Monday.

Jefferson was one of 15 players named by the Butkus Foundation under consideration. The award is presented annually to the best linebacker in college football. He leads the fourth-best defensive unit in the Big 12. Texas (4-4, 3-2 Big 12) is allowing 370.8 yards per game this season, which is a major improvement from previous years.

Texas has flexed its defensive muscle lately. After consecutive weeks of holding high-flying Oklahoma State to 13 points and Baylor to 7 points on the road on Saturday, Todd Orlando’s group has seemingly improved every week. On Monday, two of the stars of that squad were tabbed as first-round draft picks in the 2018 NFL Draft by Bleacher Report. Cornerback Holton Hill and Malik Jefferson were named as selections. Connor Williams was also projected as a top-five pick in next year’s draft.

The post Finally, there’s a pulse for the Texas offense; star lineman close to return appeared first on Hook ‘Em.

Something wicked this way comes from Fort Worth; Texas faces scary past with TCU

Oklahoma strikes a blow against Texas with Ronnie Perkins’ commitment