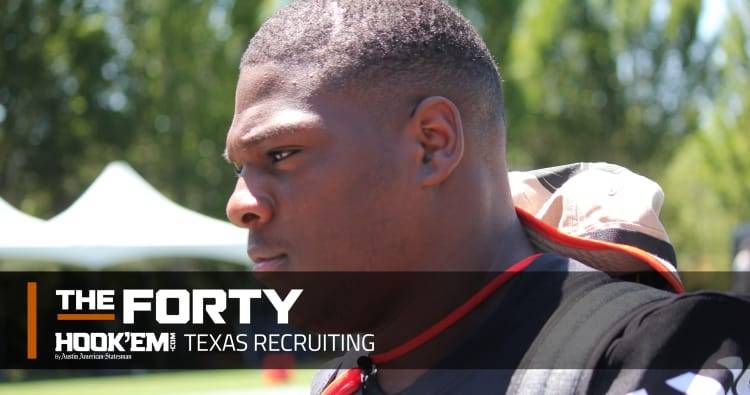 Texas’ 2018 recruiting class ranks second in the nation and first in the Big 12. That gap in the Big 12 is closing after a superb weekend of recruiting by the Sooners, including a commitment from 4-star defensive end Ronnie Perkins of Lutheran North High School (Mo.).

The 6-2, 256-pound defensive end was a major Texas target and took his official visit to Austin on Sept. 9. The Sooners wowed him on his official over the weekend and he left Norman a member of Lincoln Riley’s first class as Oklahoma head coach.

For as well as the Longhorns have recruited for 2018, the defensive line remains a concern as the first national signing day quickly approaches in December. Keondre Coburn, a 4-star defensive tackle from Houston Westfield, remains Texas’ lone commitment along the line.

Bobby Brown, a 4-star defensive lineman from Arlington Lamar, chose Texas A&M last week over the Longhorns and others. Just like with Brown, Texas doesn’t plan on throwing in the towel on Perkins until he signs with the Sooners.

Oklahoma’s 2018 class now ranks eighth in the nation and trails only Texas in the Big 12. Perkins was at The Opening over the summer and will play in the U.S. Army All-America Bowl in San Antonio on Jan. 6.

The top target for Texas at defensive end remains Conroe Oak Ridge pass rusher Joseph Ossai, who has indicated he wants to wait until signing day to make his decision.

Texas set to lose another commit?

The Longhorns lost a commitment on Oct. 23 when JUCO tight end Dominick Wood-Anderson decided to reopen his recruitment and look around. Texas will stay in the mix with him, but also could use that scholarship at another position since freshman Cade Brewer is impressing this fall.

A strong recruiting weekend from Oklahoma also included a visitor committed to Texas. Ayodele Adeoye, a 4-star linebacker at IMG Academy, was in Norman to watch the Sooners beat Texas Tech and he came away impressed. So impressed that many 247Sports Crystal Ball predictions have moved him from a Texas commit to an eventual Sooner.

Nothing is official as of Monday afternoon. Adeoye has yet to announce a flip to the Sooners, but a source who covers Oklahoma recruiting said this on the possibility of a flip following Adeoye’s visit to Oklahoma: “He hasn’t pulled the trigger yet, but the (Oklahoma) staff thinks it is a possibility for sure.”

A de-commitment from Adeoye would leave Texas with one linebacker committed in Byron Hobbs, a 3-star outside linebacker prospect from Fort Worth Eastern Hills. It also would drop Texas’ out-of-state commitments to just three.

Byron Hobbs returns to the field

Texas linebacker commit Bryon Hobbs, a 3-star recruit from Fort Worth Eastern Hills, returned to the field Friday after missing five games with a dislocated clavicle with a small fracture. Hobbs played around 20 plays in his team’s victory over Fort Worth Poly.

Hobbs is expected to be fully ready for the Week 10 matchup with Grapevine.

Finally, there’s a pulse for the Texas offense; star lineman close to return