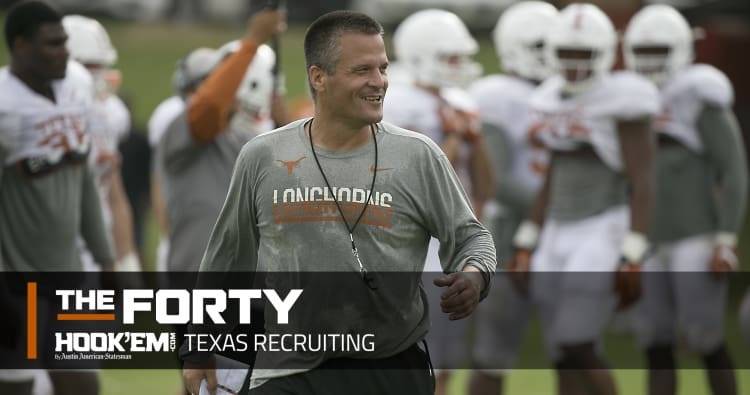 Commitments aren’t real until a prospect signs a letter of intent. A new early signing period available for all prep athletes begins Dec. 20, meaning an already fast recruiting world moves to warp speed with less than two months before commitments can become official.

The Longhorns have lost a few recent battles on the recruiting trail, but that won’t stop Tom Herman and his staff from trying to win the war by signing day. Just because a target chose a rival school in October or before doesn’t mean Herman won’t continue the chase.

Here are targets currently committed to rival schools that Texas is likely to pursue until national signing day:

Hines chose LSU over Texas back in March. The wrinkle was he was offered at the time as an offensive guard. In September, defensive coordinator Todd Orlando took over Hines’ recruitment and offered him as a defensive tackle, sparking new interest in the Longhorns from Hines. LSU responded by offering him as a defensive tackle and Hines has reaffirmed his commitment to LSU.

That doesn’t mean the door is completely shut, and the Texas staff, particularly Orlando, will remain active with Hines. The trick, as with most committed recruits, is to get him on campus for an official visit before signing day. Hines is the 30th-ranked player on the 2018 Fabulous 55.

White received an offer from Texas in October, just over two months after he had committed to Texas A&M. The 4-star outside linebacker is a speedy athlete who can strike and cover, which is needed against Big 12 offenses. Some scouts even see him as a potential middle linebacker because of his physicality.

White recently took an official visit to Oklahoma, hinting he’s not completely committed to A&M. The Longhorns could use another linebacker in the class, especially if IMG Academy’s Ayodele Adeoye continues to flirt with other programs. White is a good enough player to find room for even if Adeoye remains committed to the Longhorns.

Oklahoma dealt a blow to Texas when he chose the Sooners after an official visit this past weekend. Perkins already took an official to Texas, but the Longhorns could still be in the race if the staff can convince him to make a return trip. Perkins is hometown friends with Adeoye and it is unclear whether that will ultimately work in the favor of the Sooners or the Longhorns.

This is a true Red Rivalry recruiting game and Texas won’t throw in the towel on Perkins yet.

This courtship might be over. Brown recently chose the Aggies over the likes of Alabama, Oklahoma and Texas. The Longhorns need to add versatile defensive linemen to the class before signing day, but don’t expect much contact to continue between Texas and Brown. The Longhorns will pursue the committed prospects listed above as well as uncommitted players like Joseph Ossai and possibly Houston Lamar’s Joshua Landry.