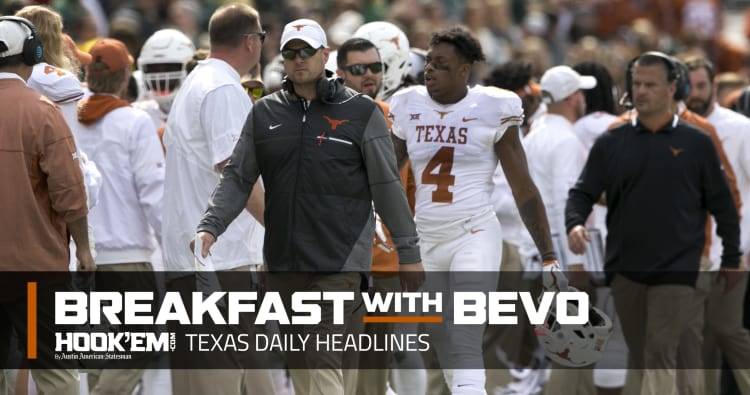 Look at the last three games Texas played against TCU and you’ll find some scary results. With a combined score of 129-26, the Horned Frogs have their longest winning streak against the Longhorns since the mid-’30s. A loss to Iowa State last weekend dealt TCU a big blow in their effort to make the College Football Playoff. Another team that lost to Iowa State before facing the Horns this season was Oklahoma. And you saw how that turned out. The Horned Frogs are expecting to bounce back at home. Big 12 reporter Suzanne Halliburton writes how comfortable the Horned Frogs feel playing at “The Carter” as they regroup from an unexpected loss.

Kamaka Hepa committed to play for the Texas basketball team Tuesday, writes Texas beat writer Brian Davis. The 4-star forward in the top 50 nationally according to 247Sports and Rivals. He’s the fourth commit for the 2018 recruiting class.

DeShon Elliott and Breckyn Hager had big performances against the Baylor Bears Saturday. As a result Pro Football Focus named both to the Big 12 Team of the Week. Hager graded out as the highest edge defender according to the website. Elliott intercepted another pass and took it for a touchdown against the Bears. The Thorpe Award semifinalist also led the team with 8 tackles. Texas beat writer Danny Davis explains Elliott’s hand gesture after big plays. He’s had plenty of those this season.

Over the weekend, 4-star defensive end Ronnie Perkins committed to play football at Oklahoma. The Longhorns have the No. 2 2018 recruiting class, but the Sooners are closing the gap. Texas still has just one defensive line commitment for the 2018 class.

Longhorns in the NFL: Week 8 highlighted by defensive fireworks