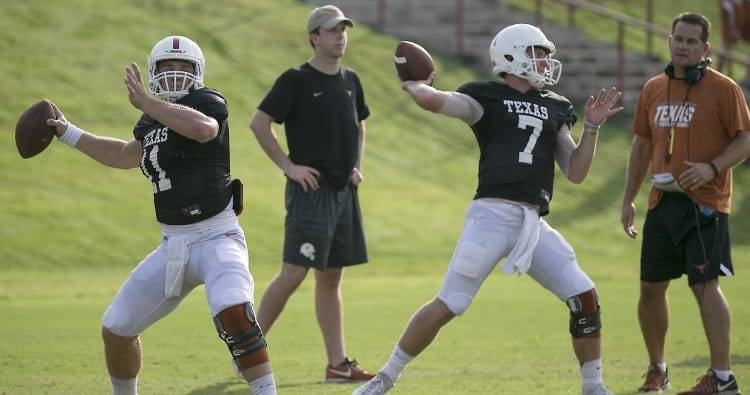 When Texas faces TCU – and the nation’s eighth-ranked scoring defense – on Saturday, the Longhorns will once again have an extra set of eyes watching them from above.

Receivers coach Drew Mehringer has been added to the list of Texas personnel working in the press box during games. UT opened the season with coordinator Tim Beck and tight ends coach Corby Meekins as the only offensive coaches who weren’t on the sidelines. Two weeks ago, however, Mehringer joined Beck.

“I think where it’s paid the biggest dividends and where it will continue to is, when our defense is out there and I’m clicked over on the headset and dialoguing with the defensive staff and paying attention to what’s going on there, is that there can be some really healthy conversations in terms of adjustments and all of that,” Herman said. “So to this point, I think it’s gone well, and hopefully it will continue.”

The jury is still out on the effectiveness of Mehringer’s move from the sidelines. In a 13-10 overtime loss to Oklahoma State on Oct. 21, Texas registered season-low totals in points and yards (283). Last week against Baylor, Texas rushed for 171 yards, passed for another 256 yards and scored 38 points.

Beck told reporters last week that another set of eyes in the press box would especially come in handy especially Texas saw a defensive scheme it wasn’t prepared for. Said Beck: “To have two minds up there maybe communicating and drawing things up and being prepared and proactive if that were to happen again we will have a couple of guys to be able to get up there and do that.”

Mehringer’s presence upstairs, of course, leaves a vacancy on the sidelines. Texas senior Dorian Leonard said the receivers have relied on graduate assistants to communicate with their position coach. Leonard has also been asked to step up as a leader.

“I try to keep all the receivers together because I’m the senior on the team,” Leonard said. “I just try to keep all of us together on the bench and when they try and make adjustments and stuff like that. Him going up there just gives me a bigger role on the field.”

Whys of Texas: Will Connor Williams come back? His heart, mind may say different things