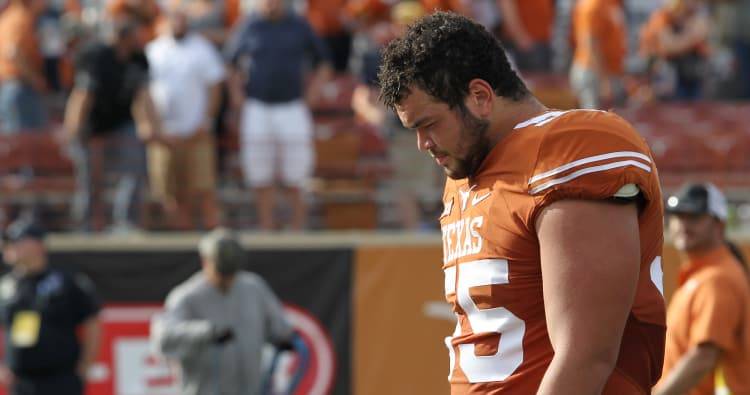 Texas coach Tom Herman caused a minor social media stir on Monday with his announcement that left tackle Connor Williams might return in two weeks from a left knee injury.

The collective UT fan response was something along the lines of, “Wait, what?”

“Connor Williams is close,” Herman said. “I think next week would be optimistic, and the following week might be a little bit more realistic. But we’ll see. He finally started going out, in fact, this morning, doing on-field drills, putting cleats on and actually changing direction, cutting, planting, all that stuff. We’ll see where he’s at with a full week of doing those drills.”

Frankly, I was surprised, but not exactly for the reasons you might think.

Williams is an NFL-caliber talent. He was an All-American last season, and many of us (yes, me included) thought he would play the 2017 season with the Horns and then jump into the NFL draft. Surely, Williams would shut it down and get ready for the offseason, right?

The only reason to come back is to help get his teammates to a bowl game for the first time since he arrived. He’s not going to help his stock by playing more. With the way rookie contracts work college isn’t where players earn their payday anymore.

The Texas Longhorns, can use all the help the offensive unit can get heading into a bid for a bowl game.

Williams probably has a dozen people telling him what to do. But understand this, if you ever want to make it to the NFL, you have to love football. L-O-V-E, love it. There’s something to be said for a player who works his tail off to get past a meniscus tear and then gets back on the field to help his teammates.

Williams, who has not been made available to reporters in weeks, may or may not return for his senior season. But the fact that he’s fighting his way back this year tells me his heart cannot be questioned. Brains? Maybe. But heart, no.

Speaking of the NFL, Herman also was asked about whether some of his talented juniors would consider going pro. This might apply to defensive backs Holton Hill or DeShon Elliott, who are both having solid seasons.

“Those discussions will never happen until after the season,” Herman said. “And there’s only been two juniors that any pro scout has even asked about, and that’s been Connor Williams and Malik Jefferson. We’ll have those conversations in due time.”

I feel vindicated that we finally played the freshmen running backs. That said, in the passing game, Warren should be our Preston Pearson (showing my age). Look him up if you don’t know.

Stuart, you weren’t the only one calling for more Toniel Carter and Daniel Young. Lots of fans wanted to see what those two freshmen had in store. We finally got to see it last week in a 38-7 win over Baylor. Carter had 70 yards on 15 carries while Young had 60 yards on seven carries. Both scored touchdowns, too. Carter came away with a concussion and is spending this week in the team’s protocol, just like quarterback Sam Ehlinger and center Zach Shackelford did. So I’m not sure we will see Carter against TCU or not. None of the players mentioned here have been made available to reporters this week.

You’ll notice that I’m not spending my time rehashing the Baylor win, right? I mean, we can if you want. But I don’t.

Texas A&M has no problems getting 34,000 students into their football games. How can Texas not figure out how to get less than 10,000 in their games? A&M also often gets over 4,000 for basketball, 1,000 for soccer, and 2,500 for baseball with zero issues other than not having enough room.

Had a lot of interesting responses to my weekly beat column about the UT student ticket issue at Royal-Memorial Stadium. A lot of fans didn’t know that UT had gone to a wristband system for student sections 26, 27 and 28. Essentially, students have been caught printing tickets at home for the upper deck (or the awful seats), then photo copying tickets for better seats and showing those to ushers once inside the gates. The UT fire marshal saw 4,500 people trying to get into a section designed for 3,000 in the Maryland game and that was enough.

I’m not going to spend more time here chastising the students for not showing up early enough to get their wristbands on time. I could probably spend equal time going after the adults who show up after kickoff, too. This is a problem UT has faced for years, and it’s not likely to change anytime soon. Come early, be loud, stay late, Mack Brown used to say. Maybe UT should start that campaign up again.

You probably already know this, but I will inform just the same. The Texas Christian University mascot is the Texas horned lizard. It is not a frog or a toad — it’s a lizard.  One wonders why an institution of higher learning appears incapable of recognizing this fact.

Um, OK. Yeah, a lizard that can shoot blood from its eyes! It’s also an animal that got caught in the crosswinds in Ames, Iowa. Er, a Cyclone. I’m expecting TCU to bounce back this week against an equally motivated Texas squad. For some reason, I don’t see the Horned Frogs — yes, that’s their official mascot name — to walk all over the Longhorns like they’ve done the last three years.

That schedule was designed for Texas to win the conference and be fresh for the Big 12 championship game. TCU is the one that should be mad. The conference is sending them to Austin the week after they host Ohio State.

In case you missed it, the Big 12 released the 2018 conference football schedule last week and it’s got some interesting wrinkles. In my mind, the biggest was the fact that Texas will not play at home on Thanksgiving weekend, something that I don’t think Herman was too pleased about. How many fans will be at Texas-Kansas the day after Thanksgiving in 2018? This is football we’re talking about, not basketball. Sigh. Otherwise, it was a straight-forward schedule. You’ve got to play all nine teams, and most coaches I know never get too worked up about the order.

Brian, excellent column about UT and TCU today. Tell Coach Herman he has excellent taste. Something Wicked This Way Comes is awesome,  and the book upon which it’s based, by Ray Bradbury, is even better. And if he likes Milky Ways, he should look for Mars bars. They’re in the British food section at H-E-B.  Even better!

Todd is referring to Tuesday’s story with a Halloween-themed lead. Clearly, I like how he thinks. Anyway, I did get a laugh out of KEYE’s Anthony Geronimo’s question to Herman about his Halloween favorites. Hey, sometimes, we have to remember that sports can be fun, too.

Have a question for the Whys of Texas mailbag? Contact Brian Davis at bdavis@statesman.com.

The post Whys of Texas: Will Connor Williams come back? His heart, mind may say different things appeared first on Hook ‘Em.

Sound Off: Who deserves credit for Texas’ defensive turnaround?