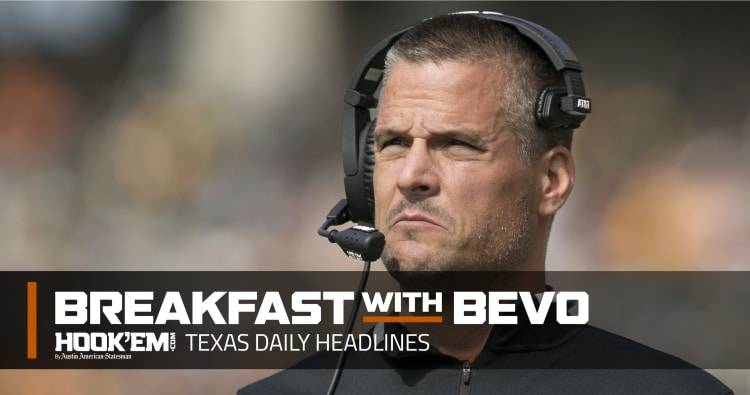 In this edition of Sound Off, Longhorns beat writers Danny Davis and Brian Davis talk about Texas’ win over Baylor and their thoughts on who should start at quarterback against TCU. Shane Buechele did a good job in the win over Baylor, but Sam Ehlinger has been cleared to play. The duo also talk about the Texas defense and its tremendous turnaround. Who deserves the credit? Brian and Danny also look forward to the matchup between Texas and TCU.

Texas receivers coach Drew Mehringer has been watching the action from the press box since the game against Oklahoma State. Longhorns coach Tom Herman likes to have two coaches that have called plays before watching from high above the action. After mixed results against the Cowboys and Baylor, Herman hopes the set up will go well against TCU.

The Whys of Texas

Texas beat writer Brian Davis saw a lot of comments concerning Connor Williams in this edition of the Whys of Texas. Williams looks poised to make a return to the field this season, rather than sit it out and prepare for his likely entrance into the NFL draft. Other comments, submitted via Facebook and email, were about the use of the Longhorns freshman running backs.

It’s not over until they sign on the dotted line

Just because a few Texas recruiting targets have committed to play elsewhere doesn’t mean Herman will stop trying to land them by signing day. Hookem.com recruiting writer Mike Craven takes a look at a few players committed to rival schools that the Longhorns haven’t quit pursuing.

The post Longhorns defense looking good, but will it be good enough against TCU? appeared first on Hook ‘Em.