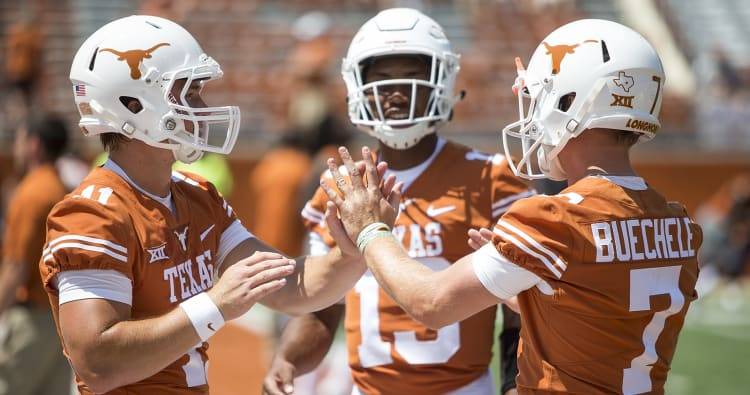 Earlier this week, Texas coach Tom Herman declined to tell reporters – or TCU, for that matter – whether he’d start sophomore Shane Buechele or freshman Sam Ehlinger against the No. 10 Horned Frogs. On Thursday, he added another quarterback to the mix.

Herman said on Thursday that Ehlinger would be available after missing last week’s win over Baylor with a head injury. Herman, though, wouldn’t commit to giving Buechele his fourth start of the season or Ehlinger his sixth. He even teased junior Jerrod Heard as a possible starter.

Herman noted that Buechele got the bulk of the practice reps with the first-team offense this week. He later added, however, that “I would imagine that all three quarterbacks are probably going to play at one point or another.”

“You’re liable to see a wide variety of quarterbacks back there,” Herman said.

A 12-time starter last season, Buechele has thrown for 813 yards and four touchdowns while completing 71.9 percent of this year’s 114 passes. Ehlinger has 1,419 passing yards and eight total touchdowns to his credit, and he had 100-yard rushing performances against Kansas State and Oklahoma.

Longhorns to go with 3-headed monster at quarterback against TCU?