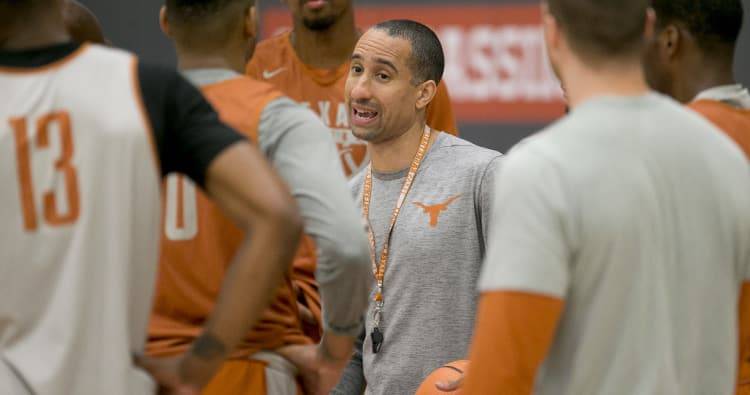 Texas has an intriguing men’s basketball exhibition game against LSU on Saturday in Houston, but shhh … it’s a secret. Game might be a strong word, anyway. Scrimmage? Practice?

You won’t read about it afterward on the Texas athletics website or see much anywhere else. It’s strictly hush-hush, according to the byzantine NCAA rulebook. No TV, no radio, no tweets, no nothing.

The NCAA allows teams to have two preseason “events,” but they generally cannot be publicized in any way. Even UT coach Shaka Smart noted the Horns played SMU last weekend in Dallas and quickly said, “I don’t know if I’m allowed to say that or not.”

It’s probably OK, right? Or Smart may have just forfeited the entire season. It’s the NCAA, so who really knows?

College basketball teams all over the country will spend this weekend playing so-called “secret scrimmages” prior to their season openers. Some have already played what look like interesting matchups. Texas A&M played Gonzaga in Denver last weekend, for example. Texas Tech tangled with Mississippi State in Fort Worth.

Coaches like flying under the radar to some degree. It gives them a chance to get quality practice work against a brand-name opponent before the games count for real. Texas opens its season on Nov. 10 against Northwestern State, for example.

“We’ve been a part of some where you play for a while, do some special situations or put 50 seconds on the clock or whatever. So it’s nice to have some flexibility with that,” Smart said. “But once you introduce the fan and media element into it, obviously you’re going to be evaluated and judged on how you do even though it’s an exhibition game.”

The NCAA should get well-deserved kudos for giving some schools a waiver to have a third preseason event for charity. This was something done on the fly. Kansas and Missouri petitioned the NCAA to have a preseason game where all proceeds would go toward Hurricane Harvey relief.

Both teams sold out the 18,000-seat Sprint Center and raised more than $1.85 million, Kansas coach Bill Self said.

That game was the impetus for A&M coach Billy Kennedy to call Smart and schedule last week’s Aggies-Longhorns matchup at Rice. That event drew more than 2,000 fans and Astros jersey-wearing Gov. Greg Abbott.

The game tugged at fans’ heartstrings for the rivalry’s permanent renewal, but both Smart and Kennedy probably didn’t give much thought to UT’s 73-69 win.

“It’s just so hard to do this early in the season,” Kennedy said. “It’s ugly basketball from a coach’s perspective, but we’re going to get so much more positive out of it by teaching and learning from our mistakes playing in this atmosphere and finding out about our young guys, more than I’ve ever done before.”

The secret scrimmage is usually a step up from previous exhibition fare. In some years, major Division I teams would typically play a Division II foe in late October or early November. The latter usually got steam-rolled.

If a new coach inherited a program that’s been down on its luck, Kennedy said that might be better than a public exhibition against a rival. “It just kind of depends now here you program is at that particular time,” Kennedy said.

Texas Tech coach Chris Beard came from the Division II world, so he knows full well the advantages of playing up — even in an exhibition game. That’s exactly why he scheduled a scrimmage against Division II Angelo State.

“I also see the value of the closed-door scrimmage,” Beard said. “As coaches, you can control those. It doesn’t have to be a 40-minute game. You can work on special situations.”

Beard likes the idea of playing two events, as outlined by NCAA rules, and a third game for charity. “I think the NCAA’s on to something with this hurricane deal,” he said.

College coaches have long talked about ways to generate some preseason publicity for their sport. One late October matchup pitting two Power Five conference schools against each other for charity may just do the trick.

It’s hard to imagine TV networks wanting to broadcast exhibition games. But  it seems like an easy way to drum up excitement among the fan base.

Smart has a great idea.

“If the NCAA does say, ‘Hey, this is something you guys can do moving forward,’ that’d be pretty neat to get four or eight state of Texas teams together (on the same day),” Smart said. “Make a big deal out of it for fans and raise money for a great cause. Let people play against each other who might not normally play or even see each other.”

Of course, that requires NCAA approval. Will it work? It’s a secret.

Texas could feature three quarterbacks in offensive plans for TCU