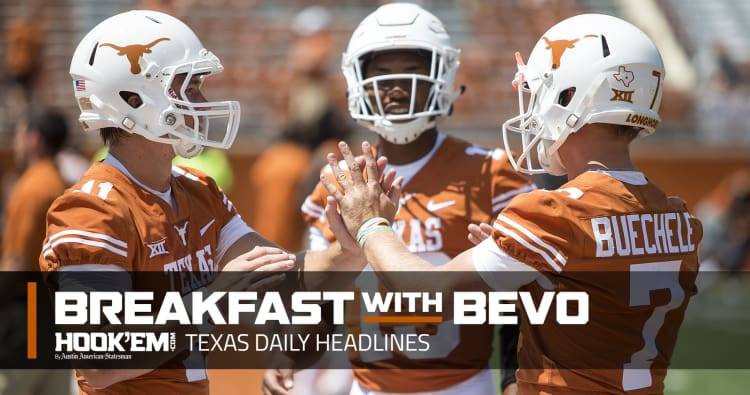 Longhorns may play 3 QBs against TCU

Texas football coach Tom Herman suggested that Shane Buechele, Sam Ehlinger and Jerrod Heard could all have a role in the Saturday game against TCU. Ehlinger is ready to play again after missing the win against Baylor as he recovered from a head injury. Though Buechele worked with the first-team for most of the snaps this week, Herman said all three are probably going to play.

After a solid freshman year, 2016 was not kind to Texas cornerback Holton Hill. He entered Charlie Strong’s doghouse and rode the bench that season as well. Alongside DeShon Elliott, Hill has been an impressive player in the Longhorns secondary. Hill’s defensive coordinator Todd Orlando thinks the corner is undoubtedly the best player in the secondary.

The Texas men’s basketball team has one more tuneup before the season starts, but you wouldn’t know it if you checked the team’s website or Twitter handle. The NCAA allows teams to have two preseason “events” that can’t be publicized in any way, writes Texas beat reporter Brian Davis. The Longhorns have already taken on SMU last weekend and are playing LSU in Houston on Saturday.

Recruiting writer for Hookem.com Mike Craven is tracking all of the in-state recruits committed to play football for Texas. You’ll find in his Week 10 guide that the only sidelined player is Jalen Green with just two weeks left in the regular season. There’s also a rundown of out-of-state players committed to Texas.

The post Longhorns to go with 3-headed monster at quarterback against TCU? appeared first on Hook ‘Em.

Texas could feature three quarterbacks in offensive plans for TCU