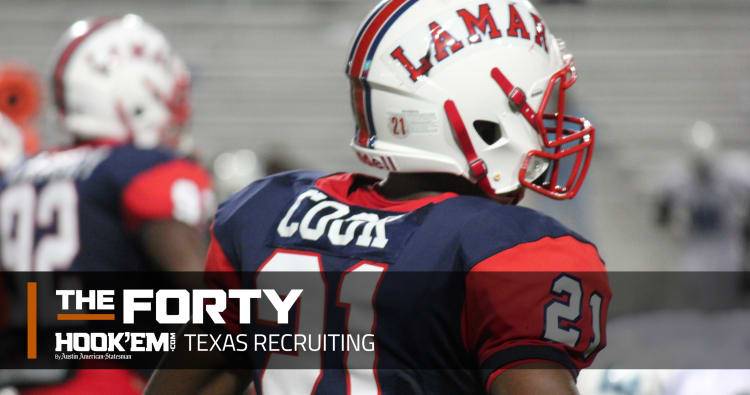 The last piece of good news in recruiting for Texas came minutes after the loss to Oklahoma, when Houston Lamar cornerback D’Shawn Jamison committed to the Longhorns over TCU. The 4-star and Fabulous 55 member became the 18th member of the 2018 class, which ranks second in the nation and first in the Big 12.

Texas wants to add at least five more players to the class before the first national signing day on Dec. 20. There are a few committed targets Tom Herman and his staff haven’t thrown in the towel on, but there are also several prospects still on the market for Texas over the next two months.

The new first signing period speeds up recruiting and most prospects hope to make a decision before Christmas.

Ossai emerged as the state’s top pass rusher in the 2018 class because of his blend of length, athleticism and raw power. He started playing football late in life and he’s still raw as a complete defensive end. He’s a pass-rushing specialist and Texas defensive coordinator Todd Orlando knows how to use those types of players and that’s appealing to Ossai.

Texas A&M is still in the picture and it could be a coin flip between the old rivals. Texas needs defensive ends and Ossai is the best in-state option remaining.

The big fish remaining in the state is 5-star cornerback Anthony Cook. Ohio State, LSU and Texas have held the lead at different points during his recruitment and he’s so torn on his decision that he moved his Oct. 30 decision date back and has yet to set a new date to announce his college destination.

Texas is appealing to his state roots. Ohio State is using a top-ranked class and a penchant for producing NFL players. LSU points to its depth chart and the amount of current NFL cornerbacks hailing from Baton Rouge. The safe bet is still on Texas.

It’s no state secret that the Longhorns need immediate help along the offensive line  whether All-American left tackle Connor Williams returns to Texas or not. Traore took his official visit to Texas for the Oklahoma State game and knows immediate playing time is likely available at either tackle position.

Texas lost out on one its top defensive end targets over the weekend when Ronnie Perkins committed to the Sooners. That could rekindle the recruiting efforts between Carson and the Longhorns. Carson appears to be the ideal body fit for the position Orlando likes to use currently with Malcolm Roach. Carson is a big-bodied end who can take on blocks and get into the backfield.

Bonitto received a Texas offer in September and took an official visit to Texas in October. He’s a big linebacker who can play outside or grow into an inside linebacker, specifically in the Big 12 where bulk isn’t always necessary. Bonitto brings speed to the field and that is what Orlando wants from his linebackers.

Texas holds commitments from three wide receivers and is still in the mix for elite playmakers like Jaylen Waddle and Terrace Marshall. The Longhorns shouldn’t be considered leaders for the either of those players right now, meaning Bush could receive more attention from the Longhorns heading into the first national signing day. Bush is a raw talent with huge upside.

Longhorns to go with 3-headed monster at quarterback against TCU?

Texas vs. TCU: Q&A with a Horned Frogs beat writer