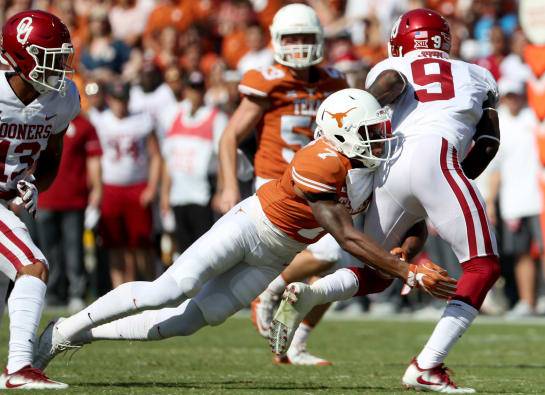 This week’s notable number is 40.

Forty is the number worn at Texas by senior linebacker Naashon Hughes and walk-on running back Trenton Hafley.  UT starting safeties DeShon Elliott and Brandon Jones both have 40 tackles this season. Major Applewhite’s 40 pass attempts against Oklahoma State in 1998 were the least needed in the five 400-yard passing games ever recorded at Texas.

UT defensive back Antwuan Davis will also play in his 40th game Saturday.

Davis is expected to take UT’s first defensive snaps at TCU, the fifth-year senior’s first start since the 2015 season. Davis will be starting in place of nickel back P.J. Locke III, who is out with an ailing ankle.

“Next guy up,” Davis said. “When your number’s called, that defense is going to be expecting you to do the same thing the starter did. I think that’s the biggest thing right now.”

Orlando noted that Davis has “been through a lot of ballgames; he has experience.”

Davis was signed out of Bastrop High in 2013. He joins Hughes and kicker Mitchell Becker as the final ties to Mack Brown’s last team at Texas. Davis, 22, is the oldest player on UT’s roster, a point that Hughes said he has made clear among the Longhorns.

Locke was injured in the first half of last week’s 38-7 win over Baylor, which afforded Davis plenty of playing time. After the win, Davis heard jokes from teammates that he hadn’t “had this much mileage in a while.” He conceded he was “sore in places I didn’t even know I was sore at.”

Davis has embraced his role as a leader. On the field, he has recorded seven tackles and a fumble recovery this season.

UT’s starting lineup on defense has been consistent this fall. In the secondary, the only missed starts ahead of this weekend were due to Kris Boyd’s first-quarter suspension against USC and Texas replacing Locke with an extra linebacker against Kansas State.

Davis, though, has joined Bonney, Thompson and Davante Davis among the defensive backs who have contributed off the bench.

“I think that’s a big thing, a part of our defense, because we really don’t have any fallouts,” Jones said.  “(If) something happens to one of our players, someone goes down with an injury or something like that, we have our second-stringers, and everyone can come in and play any position.”

Davis was a redshirt on the last UT team with a winning record as the Longhorns were 8-5 in 2013. That year’s roster featured defensive backs Quandre Diggs, Adrian Colbert, Duke Thomas and Adrian Phillips, who are now in the NFL.

The UT secondary has since fallen on hard times, and the players abandoned the unit’s “DBU” moniker as a form of self-punishment. Texas ranks 106th nationally this year in passing yards allowed (261.1 per game). The Longhorns, though, have held their own against future NFL draft picks Sam Darnold, Baker Mayfield and Mason Rudolph. Texas has forced 14 turnovers.

“I’m going to say we’re going the right direction,” Davis said. “For us to be at that (DBU) label, it has to be known by everybody in the country. We want it to be a hands-down thing. If there’s somebody a close second, or if they don’t really know, we don’t want the label.”