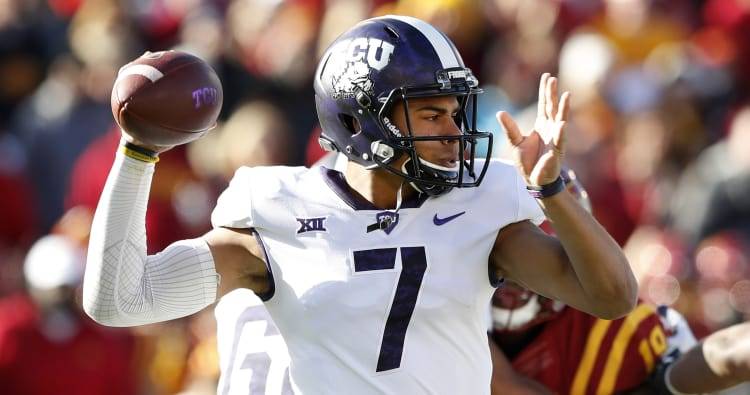 Here are five key Texas-TCU matchups to watch on Saturday:

Texas coach Tom Herman has played mum on his quarterback situation this week, but it’s likely the Longhorns will go with Shane Buechele for the second straight game. It just makes sense. Texas had constructive success last week against Baylor, so why not keep it rolling? Sam Ehlinger has practiced all week and will be cleared to play. The Frogs have allowed just 6.7 points and 164 yards in the last three games. TCU has not allowed a touchdown in 10 of the last 12 quarters.

In eight games, TCU has held every opponent to less than 150 rushing yards. That doesn’t bode well for Texas, which has struggled to run all season long. Toneil Carter was sidelined this week with a concussion. It’s unclear if he’ll be medically cleared to play. That could mean more carries for freshman Daniel Young, who rushed for 60 yards on seven attempts against Baylor. The Horns can’t afford to let the Frogs pin their ears back and come after Buechele.

Hill has completed 67.8 percent of his passes this season, the highest total since his freshman year at Texas A&M. But he’s long past the days of Kenny “Trill.” Hill has 15 touchdowns and five interceptions, a number that Elliott wants to increase. The Texas safety leads the nation with six picks, a major reason why Elliott’s now a Jim Thorpe Award semifinalist. For Elliott to excel, the Horns up front need to get pressure on Hill and make him do something exceptional. That’s not really his strength.

Texas defensive ends Malcolm Roach and Breckyn Hager must have solid days as third-down pass rushing specialists. Hager has really come on of late, with eight tackles in the last two games. Roach has been steady all season long. Both could stand to make some game-changing plays. This is yet another game where the Texas defense must lead the way. TCU’s Joseph Noteboom has started every game this season at left tackle. Lucas Niang has started the last four weeks.

TCU’s Gary Patterson vs. the Ghost of Charlie Strong

Herman tried to downplay the last three Texas-TCU games, all UT losses. Oh, but he made sure the players were reminded of the scores — 48-10 (2014), 50-7 (2015) and 31-9 (2016). Players have had to look at signs all week long with those numbers generated on former coach Charlie Strong’s watch. Patterson likely knows he can’t kick UT around so easily anymore. Herman and defensive coordinator Todd Orlando present new challenges. And with a 6:15 p.m. kickoff, there’s no reason the Horns can’t be ready to go.

WATCH: Texas aiming to ‘Make a statement’ against No. 8 TCU