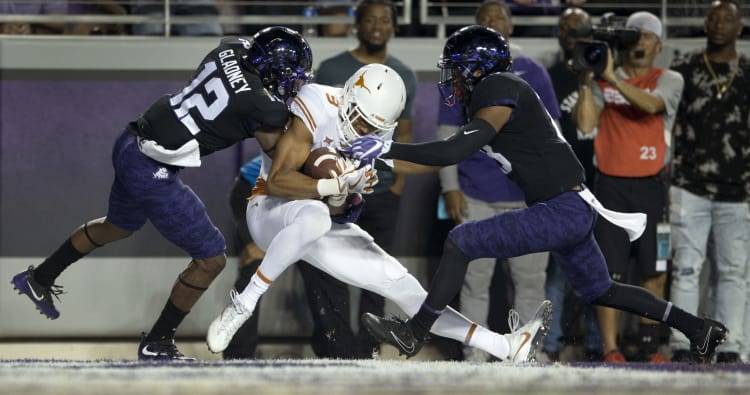 It’s halftime, and Texas trails No. 8 TCU is leading Texas 17-7 at Amon Carter Stadium in Fort Worth.

The Longhorns are 7-point underdogs tonight. They’ve covered the spread for eight straight weeks, a streak that appeared to be in real jeopardy until Texas’ defense woke up in the second quarter.

If only the offense would wake up, too.

1. One week after Texas blew past Baylor and TCU laid a clunker at Iowa State, it’s the Longhorns who look sluggish tonight and it’s the Horned Frogs that are looking quicker, more energetic and ready to play. They’re making big plays, converting third downs, moving the chains, mixing it up on offense — and scoring points.

Basically, everything the Horned Frogs are doing, the Longhorns ain’t.

2. High points for the horns? Shane Buechele’s one big play — a 33-yard touchdown pass to Collin Johnson (remember him?). There also was a fourth-down conversion (though it went for naught, as Joshua Rowland ended up missing a 47-yard field goal try) and a goal line stand that forced a field goal. And a 76-yard punt. The low points? A facemask and two personal foul penalties, the missed field goal and another week with a non-existent running game.

Maybe that missed field goal came into play near the end of the half, when Tom Herman, trailing 17-7, went for it on fourth-and-4 from TCU’s 32 rather than trot Rowland out for a 49-yard effort. Buechele was sacked for a 6-yard loss, and TCU took over.

Another low point: Buechele has been sacked four times, including three in the second quarter. The last one was the costliest, as it came on second-and-10 from TCU’s 31-yard line in the closing minutes of the half. A 7-yard loss that turned it into a third-and-17 play out of field goal range.

3. The running game? Not so much. The Horns have rushed for all of 14 yards. Daniel Young has six carries for 12 yards and he’s leading the team.

4. Texas has had six drives. Here’s how they’ve played out:

DE Malcolm Roach: Stuffed a third-and-goal play from the 1, completing a goal line stand to force a TCU field goal. … In the 2nd quarter, on third-and-2 he stopped Kenny Hill for a 2-yard loss, forcing a punt

CB Holton Hill: Trailing 7-0, he saved a touchdown by stuffing Kyle Hicks on second-and-goal on the final play of the 1st quarter. It was a key part of a goal line stand.

No. 8 TCU 24, Texas 7: Offense takes the night off as Frogs ride quick start