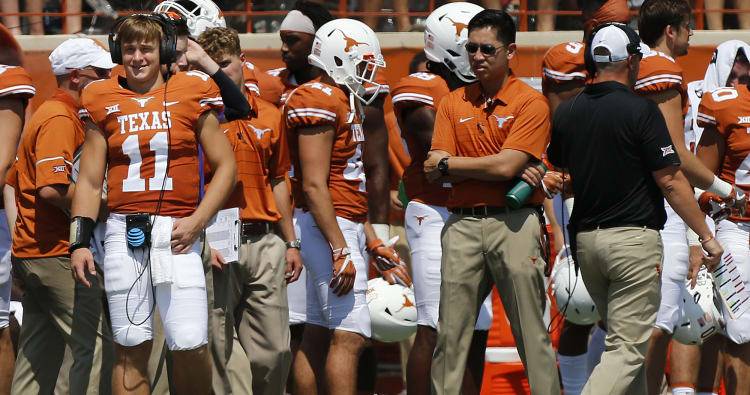 FORT WORTH – Freshman quarterback Sam Ehlinger was not dressed out ahead of Texas’ game at TCU on Saturday. Ehlinger missed last week’s 38-7 win over Baylor with a head injury. He did not make the trip to Waco.

Ehlinger returned to practice on Sunday, and head coach Tom Herman said two days ago that the quarterback would be available for Saturday’s game. Ehlinger, however, was seen at Amon G. Carter Stadium going through conditioning drills with other inactive players. (Center Zach Shackelford and running back Toneil Carter, who both suffered head injuries last month, were also not dressed out).

Sophomore Shane Buechele, who has started three times this season, was joined in warm-ups by fellow quarterbacks Jerrod Heard and Josh Covey. Ehlinger, meanwhile, played catch with Heard while in shorts.

Ehlinger has started five times, and he has completed 107 of his 192 passes for 1,419 yards. The Westlake product also rushed for over 100 yards in games against Kansas State and Oklahoma.

The post Texas QB Sam Ehlinger makes the trip to Fort Worth but will sit out second straight game appeared first on Hook ‘Em.