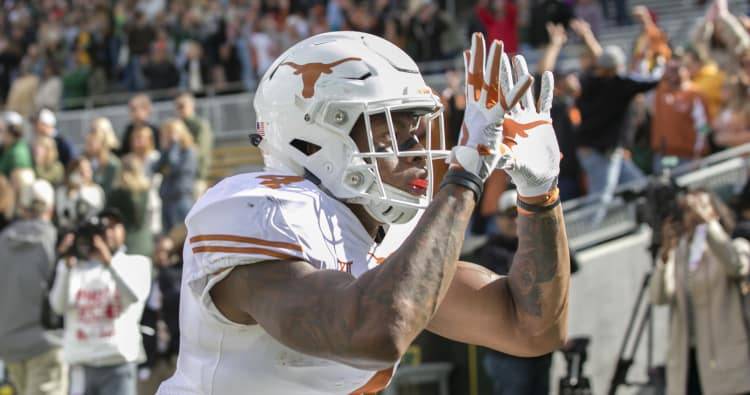 Texas players will have to readjust their game day body clocks ahead of their game Saturday against TCU. After three straight weeks playing in the afternoon, the Longhorns will head to Forth Worth for an evening tilt against the Horned Frogs.

Texas (4-4, 3-2 Big 12) needs 2 more wins to secure bowl eligibility, but faces one of its stiffest tests of the season in No. 10-ranked TCU (7-1, 4-1) which is tied for the Big 12 lead. The Horned Frogs return home licking their wounds after suffering their first loss of the season last week at Iowa State.

Weather: The temperature at kickoff is supposed to be 84 degrees with 53 percent humidity, sunny skies and a 13 mph wind out of the south. There is a 5 percent chance of rain beginning at 9 p.m.

The line: TCU is a 7-point favorite to beat Texas.

Which TV channel is Texas-TCU on?

The game between Texas and TCU in Week 10 is on ESPN. Bob Wischusen (play-by-play), Brock Huard (analyst) and Allison Williams (sideline) will be the announcers.

How can I watch the Texas-TCU game online?

The game between Texas and TCU will be streamed live on WatchESPN.com and via the ESPN app. You can access the broadcast with a cable subscription login.

How can I listen to the Texas-TCU game on the radio?

The Texas-TCU game in Week 10 will air live on the Longhorn IMG Radio Network. In Austin, the local radio affiliate is 104.9 The Horn. A full list of Longhorns radio affiliates can be found here, or you can click the play button below to listen online.

Texas-TCU preview, 3 keys to the game

Ah, this again. Just when it appeared freshman Sam Ehlinger had grabbed the reins as the Texas quarterback, a concussion has thrown the situation out of whack. Shane Buechele started and played well last week, completing 27 of 34 passes for 256 yards, 1 touchdown and an interception in a 38-7 win over Baylor. Then there’s Jerrod Heard, who continued to take snaps in practice this week. On Thursday, Texas coach Tom Herman hinted that all three quarterbacks might see the field.

Perhaps the factor motivating Herman to switch things up at quarterback is a struggling rushing attack. Texas finally appeared to make strides against Baylor, but leading rusher Toneil Carter (70 yards) suffered a head injury and will miss the game against TCU. Fellow freshman Daniel Young ran for 60 yards last week, but junior Chris Warren III only received 2 carries for 3 yards.

TCU quarterback Kenny Hill reverted back to his old ways in the team’s loss to Iowa State last week, throwing 2 interceptions — including 1 inside the Cyclones 10-yard line. Texas has done well forcing quarterbacks into mistakes this season. Safety DeShon Elliott alone has 6 interceptions. Against a team as good and motivated as the Horned Frogs, takeaways could be huge.

The Eyes of Texas: 3 Horned Frogs the Horns will be watching