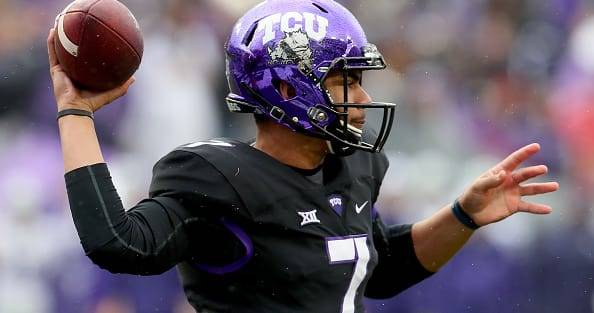 On Saturday against TCU, the eyes of Texas will be upon …

Hill ranks fifth in the Big 12 with 1,863 passing yards. The senior has thrown 15 touchdown passes and has rushed for two more scores — and he even caught a 48-yard touchdown pass against West Virginia. But he’s also coming off a sub-par performance in last week’s 14-7 loss at Iowa State; he completed only half of his 25 attempts and was held to 135 yards. Hill, who began his career at Texas A&M, led TCU to a 31-9 win over the Longhorns last year with 228 yards of offense.

After sitting out last year following his transfer from Louisiana-Monroe, Banogu has made an immediate impact on TCU’s defense. The 6-4, 245-pound McKinney native has four-and-a-half of the Horned Frogs’ 21 sacks; he also has 32 tackles and six quarterback hurries. In 2015, at ULM, he had five sacks as a redshirt freshman. The Longhorns are allowing 2.6 sacks a game.

Nixon is the latest Lake Travis Cavalier who gets to take a shot at his hometown team, after Oklahoma quarterback Baker Mayfield and Baylor quarterback Charlie Brewer. Nixon was a four-star recruit when he signed with TCU and is the school’s record-holder for receptions in a bowl game. Injuries cost him his 2014 and 2016 seasons, though Texas fans may remember his 29-yard touchdown pass that Nixon threw against the Longhorns in 2015. This season he has 11 catches for 113 yards and a touchdown.

The post The Eyes of Texas: 3 Horned Frogs the Horns will be watching appeared first on Hook ‘Em.