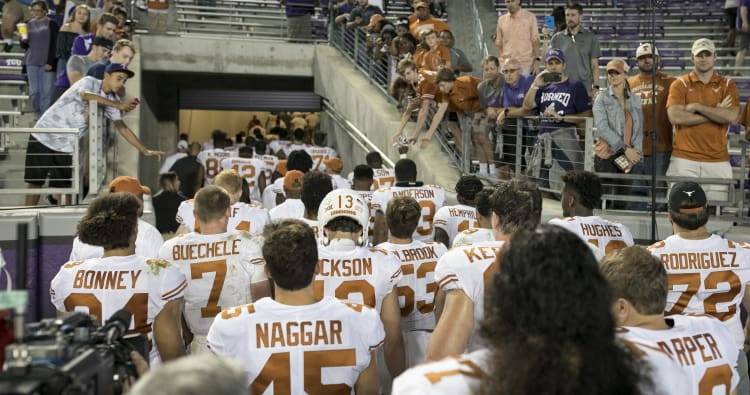 FORT WORTH — There were 143 snaps taken in Texas’ 24-7 loss to TCU on Saturday night. Here are five that ended up making a big difference:

Thanks in part to a personal foul and a face mask called on Texas, TCU had little problem moving the ball on the game’s opening drive. The Horned Frogs eventually faced a 4th-and-2 at the Texas 21.

TCU lined up without a quarterback and gave the football to receiver KaVontae Turpin on a run to his right. Turpin, though, threw the ball back to running back Sewo Olonilua. Turpin’s throw barely eluded the fingertips of UT lineman Chris Nelson, and Olonilua gained 20 yards on the catch.

Trick plays have burned Texas all year. Here’s how TCU set up its TD — a double pass. #HookEm #GoFrogs pic.twitter.com/scVArWuaN8

The Horned Frogs scored the game’s first touchdown on the next play. TCU’s trickery came four weeks after Turpin threw a 48-yard touchdown to quarterback Kenny Hill in a 31-24 win over West Virginia.

Texas entered the game having stopped 12 of the 14 fourth-down conversions it faced. That success rate ranked second in the country. TCU went 2 for 2 on fourth downs Saturday, which dropped UT’s national ranking to fourth.

TCU opened the second quarter with a third down at the UT 1. The Longhorns stuffed Olonilua, and the Horned Frogs settled for a short field goal and a 10-0 lead. Texas then squandered a chance to get those three points back.

Texas pieced together a drive that led to a first down at the TCU 30, but quarterback Shane Buechele threw three straight incomplete passes. UT head coach Tom Herman then sent junior Joshua Rowland out for a field-goal attempt.

Rowland had previously made a 49-yard kick at Iowa State, but he was short on this 47-yard try. Signed by Herman out of Mississippi Gulf Coast Community College, Rowland has now missed half of his 14 field goals.

Texas fared better the next time it touched the football. Buechele connected with Lil’Jordan Humphrey for a 37-yard gain, and UT then drew TCU offsides. On the drive’s second play, Buechele threw a 33-yard touchdown pass to Collin Johnson.

Collin Johnson is out of the dog house and back to making insane catches. Here’s the 33-yd TD. pic.twitter.com/txfL1I05bS

On the play, Johnson beat TCU defensive back Jeff Gladney to the jump ball. Gladney and teammate Nick Orr attempted to get their hands on the football, but the 6-6, 220-pound Johnson maintained possession.

The touchdown was Johnson’s first since a season-opening loss to Maryland. Johnson, a sophomore who lost his starting gig after a 29-24 loss to Oklahoma, still leads UT with his 39 catches. He caught three footballs on Saturday.

Texas entered halftime facing a 17-7 deficit as the Longhorns wasted additional chances to score. In addition to Rowland’s miss and Johnson’s catch, UT reached the TCU 35 on two other second-quarter drives. Those possessions, however, were ruined by sacks.

On a fourth-and-4 from the TCU 32, Buechele was sacked by Horned Frogs defensive tackle Chris Bradley. Buechele later moved Texas to within 31 yards of the end zone, but the Longhorns were forced to punt after their quarterback was sacked on consecutive plays.

Buechele was sacked seven times on Saturday. It was the most sacks allowed by Texas since Oklahoma State registered seven takedowns in a 2015 meeting.

Texas’ defense did its part in the second half, forcing four three-and-outs over TCU’s first five possessions. The offense, however, couldn’t get any closer on the scoreboard.

TCU finally found a crack in the Texas defense. Midway through the fourth quarter, TCU drove from its 23 to the Texas 31. Facing a 4th-and-1 with 4:30 remaining, TCU kept its offense on the field after a Texas timeout. Darius Anderson turned the conversion attempt into a 31-yard touchdown run.

This marked the second straight year that Anderson delivered TCU’s knockout punch against the Longhorns. In last year’s 31-9 win, Anderson closed out the scoring summary with a 70-yard touchdown run with 7:32 left.

Third and Longhorns: Inside TCU 24, Texas 7