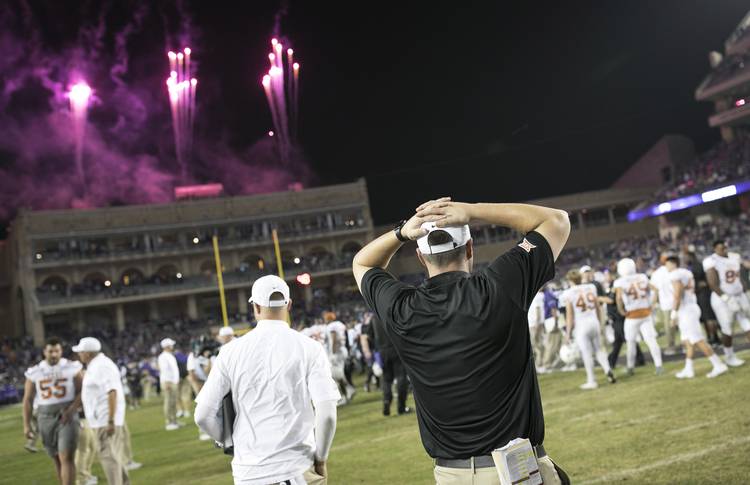 FORT WORTH — Nobody is going to darken the doors at the Moncrief-Neuhaus Athletic Center and save Texas.

“It’s not the NFL,” coach Tom Herman said after Saturday’s disheartening 24-7 loss to TCU. “We can’t go on the waiver wire and go pick up free agents.”

If that was indeed an option, one gets the sense Herman would gladly cut ties with some of his under-performers. But it’s not, so he can’t and everyone is drowning in the soup.

Herman believes the Longhorns’ offense can improve in the final three regular-season games. “There’s no doubt about that in my opinion,” he said. That goes against years of logical reasoning, though.

The grim reality is the Longhorns probably are what they are offensively. Cringe accordingly.

Texas (4-5, 3-3 Big 12) still needs two more victories to reach bowl eligibility. Home games against Kansas and Texas Tech sandwich a road trip to West Virginia. None of those are automatic wins, not even the lowly Jayhawks (1-8, 0-6), not after what happened last season.

There are so many questions and so few answers. All that’s known is that Herman is still in danger of finishing worse than former coach Charlie Strong did in his first season. The Horns went 6-7 in 2014, and Strong never posted a winning record.

“Our defense every week plays just great,” quarterback Shane Buechele said. “That is frustrating and I’m sure it’s extremely frustrating for them to see what we do on offense.”

Herman, long known for his offensive creativity, must figure out a way to give the offense a boost. The defense is playing well enough to win every game. So if that means stripping the play-calling duties from offensive coordinator Tim Beck and giving them to receivers coach Drew Mehringer, so be it.

Mehringer’s already been moved from the sideline to the press box on game days to be an “extra set of eyes,” Herman has said. He was Rutgers’ offensive coordinator last season before joining Herman in Austin. Or, if Herman has to take over play-calling duties himself, that would be an open acknowledgement he’s taking full command — ergo, responsibility — of his own offense.

Herman was clearly frustrated after the TCU loss. “There’s no threat of a run game and you can’t stay ahead of the chains, it becomes very difficult to move the football,” he said.

It’s obvious this coaching staff has given up on Chris Warren III and Kyle Porter. Warren’s had three carries combined in the last two games. Porter didn’t carry it at all. Freshman running back Toniel Carter (concussion protocol) missed the TCU game while fourth-stringer Danny Young had 31 yards on 12 carries.

It’s hard to run anywhere when the offensive line can’t sustain blocks. From the personnel usage, it appears this coaching staff is fed up with sub-par play. But nobody’s available to sub in.

Tackle Denzel Okafor started the last four weeks. His name wasn’t even listed on the participation chart against TCU. The coaches went with Tristan Nickelson, who played sporadically in October. This staff shows no mercy to those who practice poorly or cannot handle adversity.

Midway through the affair, coaches had to use tight end Cade Brewer and Warren in the backfield as extra blockers just to give Buechele a puncher’s chance.

“Personally, I had a lot of mistakes,” guard Patrick Vahe said. “But we’ve got to go into that film room, we’ve got to watch it and make sure it never happens again.”

It’s unclear whether quarterback Sam Ehlinger will be cleared to play again this season. He suffered a late-week setback in the concussion protocol and was sidelined against TCU. The status of tackle Connor Williams (knee) and center Zach Shackelford (concussion) is uncertain, too.

If any or all could play against Kansas, that would help. Right now, these Longhorns need every able-bodied player they can find.