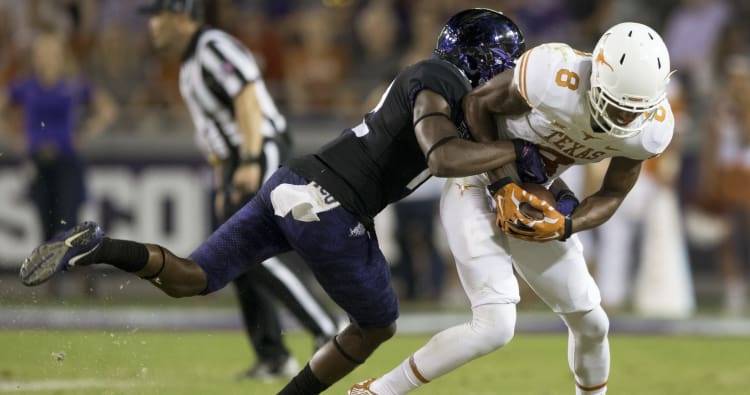 FORT WORTH — The Longhorns leftover from last season’s roster might feel they are currently living in a Bizzaro World.

In 2016, Texas was scoring a respectable 31.9 points per game. That ranked 46th nationally. The UT defense, though, was suffering through the second-worst season in school history (31.5 PPG).

Texas is now allowing 21.3 points per game. If the season ended today, would be the defense’s best showing since 2009. The offense, however, has sputtered in various showcases this year, one of which was Saturday’s 24-7 loss at TCU.

“It’s frustrating because you just work so hard every day, you play your heart out but you still come up short,” Texas defensive lineman Chris Nelson said. “At the end of the day, we still have to figure out a way to collectively get a W.”

Texas opened the year with a 51-41 letdown against Maryland, but the defense has seemingly turned things around. The defensive improvements have been showcased in four games against teams ranked in the Associated Press poll.

UT surrendered 27 points in a loss at USC in September, but that game was decided in two overtimes. Those Oklahoma and Oklahoma State offenses that combined for 114 points in Bedlam on Saturday? They respectively scored 29 and 13 points against Texas, and Oklahoma State got its final three points in overtime. TCU, which moved up to No. 8 in this week’s AP poll, was held to the second-lowest output of its nine-game season.

Against TCU, Texas allowed 343 yards in a battle of what head coach Tom Herman described as “the two best defenses in our conference.” Texas, however, still dropped to 0-4 against those ranked teams.

In those aforementioned games, Texas is averaging 16.3 points. USC, Oklahoma, Oklahoma State and TCU each held Texas under their defense’s scoring averages.

“Our defense just every week plays great,” quarterback Shane Buechele said. “That is frustrating and I’m sure it’s extremely frustrating for them, just seeing what we do on offense.”

On Saturday night, Longhorn defenders declined to place the blame for UT’s 4-5 record on the shoulders of its offense.

Texas defensive backs Antwuan Davis and DeShon Elliott both downplayed the defense’s performance against TCU. As Davis noted, TCU scored 24 points and “for a perfect defense, you allow zero points. That wasn’t the case for us.”

The defenders also put the onus on themselves to encourage their offensive teammates. Linebacker Malik Jefferson said his side of the ball needed to push the offense harder in practice. Nelson suggested placing more capable players on the scout team.

“We have total faith in the offense,” said Davis, who was making his first start since 2015. “Nothing negative ever to the offense. They know they pick us up, we know we pick them up. That’s just how this team works.”

The post Texas defenders not pointing fingers at the offense after 24-7 loss to TCU appeared first on Hook ‘Em.