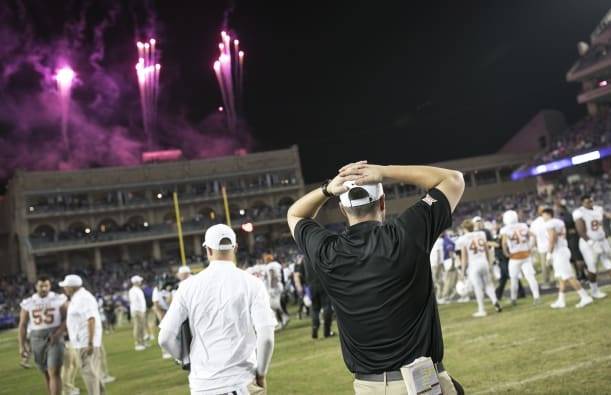 Heard this one before? Texas’ defense played well enough to leave Fort Worth with a win, but the offense didn’t. Shane Buechele completed less than half of his pass attempts and the Longhorns averaged 0.3 yards per carry. (That is not a typo.) Now we’re wondering — again — whether Buechele or Sam Ehlinger should be running this thing. Texas gave up seven sacks, several of them coming on key third downs. The Longhorns just couldn’t finish drives; nine of their 14 drives ended in punts and three more ended on downs. Drives that reached TCU’s 30 (missed field goal), 38 (downs) and 35 (downs) all yielded zero points.

A quick early start — three of TCU’s first four drives of the night resulted in two touchdowns and a field goal — was good enough, especially with Texas unable to finish off drives. Maybe last week’s disappointment in Ames played a part, too. The Horned Frogs were perfect in the red zone, which was a problem for them last week, and Kenny Hill was perfunctory as a passer (18 of 26 for 146 yards, no touchdowns and now interceptions) but effective as a runner, making first downs. TCU’s defense was active and kept the Longhorns off balance, shutting down Texas’ running game and sacking Buechele seven times.

The Eyes of Texas

The Longhorns kept their eyes on three specific Horned Frogs — Hill, the Big 12’s fifth leading passer who was coming off a sub-par performance against Iowa State; defensive end Ben Banogu, who had 4 1/2 of TCU’s 21 team sacks heading into the game; and wide receiver Shaun Nixon, a former Lake Travis standout.

How did they do?

Banogu had three tackles, 2 sacks and 3 tackles for loss.

Nixon didn’t have a touch.

Lil’Jordan Humphrey had six catches for 109 yards, including one for 42 yards. He was targeted 10 times.

Gary Johnson had his finest game as a Longhorn with nine tackles, a sack and 1.5 tackles for loss.

Malcolm Roach had five tackles, but three of them were big ones. He stuffed a third-and-goal run from the 1, completing a goal line stand to force a TCU field goal; in the second quarter, on third-and-2, he stopped Hill for a 2-yard loss to force a punt; and he tripped up Hill one yard short of a first down on a third-and-5 run on TCU’s first drive of the second half.

It was a big night for Lil’Jordan Humphrey. set career highs in catches and yards and became Texas’ first 100-yard receiver against TCU since 2013. … Daniel Young led the team in rushing in his first career start; he became the 13th Longhorn this season to make his first career start. … Buechele, with 1,067 yards in his fourth start, became the eighth-fastest in UT history to reach 1,000 yards in a season, and his 13th career 200-yard game is sixth all-time. … Michael Dickson helped his Ray Guy Award chances by averaging nearly 51 yards on nine punts, including a 76-yard monster in the first quarter. That was the longest in his career and tied for the fifth-longest in school history.

The post Third and Longhorns: Inside TCU 24, Texas 7 appeared first on Hook ‘Em.