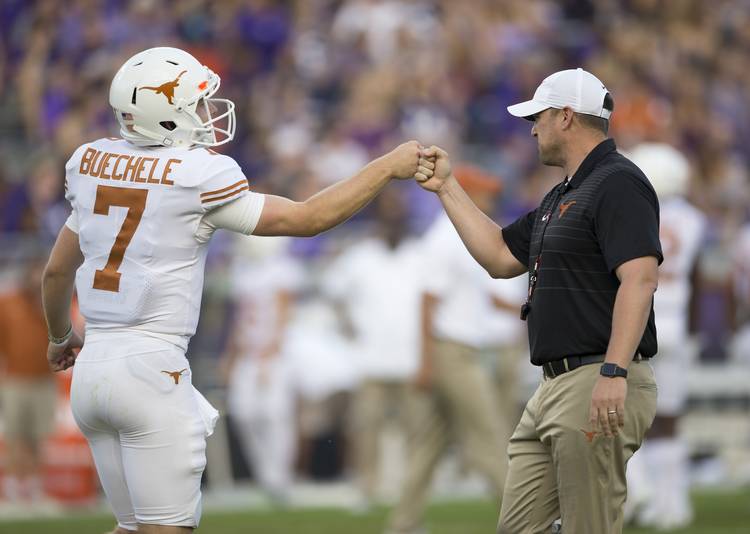 The definition of insanity, as Texas coach Tom Herman has mentioned over and over again, is performing the same act expecting different results.

Texas has done that almost every year this decade by changing play-callers. Lo and behold, nothing ever changes for a program that sits three games over .500 since 2010.

Tim Beck is the program’s seventh play-caller in the last eight seasons. The Longhorns keep changing the coach with that responsibility and continue to get the same mediocre results.

Herman made it clear Monday that he’ll stick with Beck and the entire coaching staff for the rest of the season and into 2018 as a bid for continuity. “Oh, my gosh, yes,” Herman said. “One hundred percent.

“I hired these guys knowing exactly what I was going to get,” Herman said in a full-throat defense of his offensive staff. “We’ve all to got to get better, especially on that side of the ball. But I have full confidence that we will.”

Every one of them wanted to run the offense a certain way and use certain terminology. It was almost always different from the year before. For example, sophomore Shane Buechele came in last season learning Gilbert’s quick-read passing system. One, two, get rid of it, Buechele was told.

Now with Beck, Buechele has to read the defense and think on the fly, all while running from overzealous defenders that have blown past their blockers. “They’re totally different,” Buechele said.

Herman said receivers coach Drew Mehringer would not take over play-calling duties. Mehringer, who called plays at Rutgers, has already been moved from the sideline to the press box to sit next to Beck on game days.

Herman said play-calling was a collaborative process. “If a play comes out that I don’t think should be run, I’m going to say, ‘No, don’t run that play,’” Herman said.

Even if the Horns lose every game the rest of the way, Herman appears comfortable sticking to his guns — and his assistants.

“I think continuity and consistency with your staff is really, really important in college football,” Herman said. “It’s one of the most underrated reasons for success in my opinion, and it’s why now as a head coach, now I see why all the other head coach that I worked for were always so protective of their assistant coaches and didn’t want them to leave. They understood the value in continuity.

“That’s a real thing and one that needs to be recognized in my opinion.”

The Longhorns have dropped to eighth in Big 12 scoring (28.6 points per game). That’s just ahead of Baylor (25.9) and this week’s opponent, Kansas (19.7). To be competitive, teams must average somewhere in the mid-30s, preferably closer to 40 per game.

“I think fixing the problem is probably a very tall order to expect in three weeks,” Herman said. “(Right tackle) Derek Kerstetter is not going to gain 20 pounds the next three weeks. All of the issues are going to be solved; they’re going to be solved through bowl practices, winter offseason, spring football and all of that.

“So I think the biggest thing we can do as a staff is mask the deficiencies as best we can.”

Herman said freshman quarterback Sam Ehlinger, who has played the last two weeks, would be evaluated Monday afternoon for an inner ear problem that sidelined him against TCU.

Center Zach Shackelford and running back Toneil Carter both are still going through the concussion protocol and continue to be monitored. Linebacker Jeffrey McCulloch suffered a high ankle sprain against the Horned Frogs. Tackle Connor Williams (knee) and nickel back P.J. Locke III (ankle) are likely out this week.

There are no magical answers to fixing the offense. But Texas (4-5, 3-3 Big 12) somehow must win two of its final three games to reach bowl eligibility.

“Anything better than previous years has to be considered somewhat of a success. It’s called improvement, right?,” he added. “You see really, really hard-playing guys that are playing very physical and very intense; that in and of itself is a success, and we’ve got to continue to then translate that success into success on the scoreboard.”

Herman likely isn’t going to bother showing players any highlights from last season’s 24-21 overtime loss to Kansas. It was a game that effectively ended the Charlie Strong tenure.

“We were 16-21 the past three years,” Herman said. The not-so-subtle dig on Strong was eliminated from the transcript posted on the Texas athletics website. “There’s plenty of reminders.

“The past is my opinion not a great motivator,” he added. “If it gives a kid a little extra edge knowing they were embarrassed last year, then so be it. it’s not something we’ll dwell on. Again, the clock’s ticking on the regular season and opportunities to win a football game.”

Deep down, Herman may feel the clock is ticking on him, too.