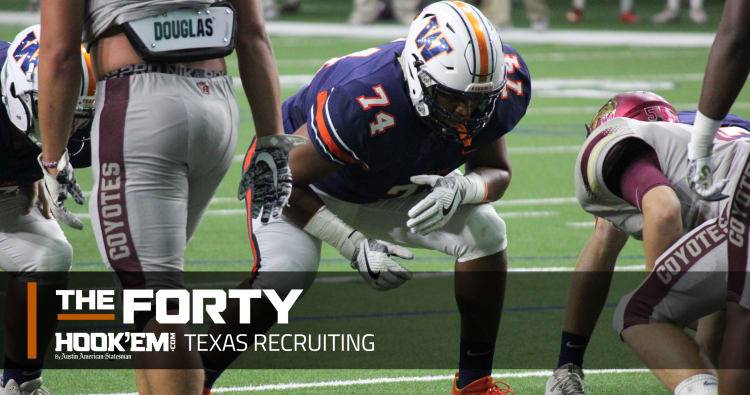 Texas is struggling along the offensive line and recruits are noticing, specifically 2018 offensive tackle commit Rafiti Ghirmai. The 4-star prospect from Frisco Wakeland committed to the Longhorns over UCLA and a host of other programs in August.

“My mentality is to take someone’s starting spot. I don’t care if they’re 6-foot-11 or 23 years old, I’m ready to compete,” Ghirmai said. “(Texas) likes me at tackle and I can play right or left tackle.”

“We text every day. We talk on the phone about twice a week to catch up,” Ghirmai said. “We don’t just talk about football. We also talk about school and homework. Normal, everyday stuff.”

Ghirmai hasn’t decided if he’ll sign in December or wait until the second national signing period. He also didn’t rule out still taking an official visit to UCLA, which is the clear threat to Texas for Ghirmai’s signature.

“Right now, I really don’t know about the (UCLA) visit,” he said. “I don’t want to give you an answer and do something different, so I’ll hold off on that.”

Ghirmai plans to visit Texas after his season concludes and wants to see the Longhorns “compete hard and not give up” during the remainder of the season. The 6-4, 290-pound prospect is ranked No. 46 on the Fabulous 55.

Injuries are never easy to overcome. The Longhorns watched a few offensive linemen transfer or leave the program and then saw the likes of All-American Connor Williams get injured. Ghirmai, and fellow offensive line commit Reese Moore, also noticed the injuries.

“Right now they’re having a rough path with young players and hurt players,” Ghirmai said after his game on Friday. “We have at least 11 people hurt who are starters, and they’re experiencing the same thing at Texas. It’s been a setback.”

Moore had a similar sentiment after his game last week against Sweetwater.

“Right now the plan is to stay healthy, gain good weight and be ready,” Moore said. “The redshirt has been thrown around and that is the plan right now, but as we’ve seen, anything can happen with injuries so I want to be ready for whatever the team needs.”

The Longhorns also are in the mix for JUCO offensive tackle Badara Traore and out-of-state recruit Junior Angilau out of Salt Lake, Utah.

At least one of those recruits hopes Williams returns from injury and plays another season in Austin, even if it means a longer path to playing time.

“It would be nice to learn from Williams. He’s a great athlete and player,” Moore said. “He’s an unbelievable player and we have a lot of similarities coming out of high school.”

Even the elite prospects aren’t finished prospects coming out of high school. The smart ones understand there’s a long way to go before college success is attained. Ghirmai is one of the smart ones.

“I want to improve on my hands, honestly. There are times I’ve let a defender slap my hands away and I can’t let that happen,” he said. “I’ve come a long way with my footwork and I need to keep improving as an athlete.”

Wakeland is in a tight playoff race. The team started fast before recently going through a three-game losing streak. A win last Friday against rival Frisco Heritage put Wakeland right back in the mix. It also revealed some character for the young team.

“Our recent losing streak impacted us and our coaches took on us a spiritual journey and taught us about brotherhood and how to overcome adversity,” Ghirmai said. “I had to be a leader because I’m captain of the offensive line. We just needed to execute.”