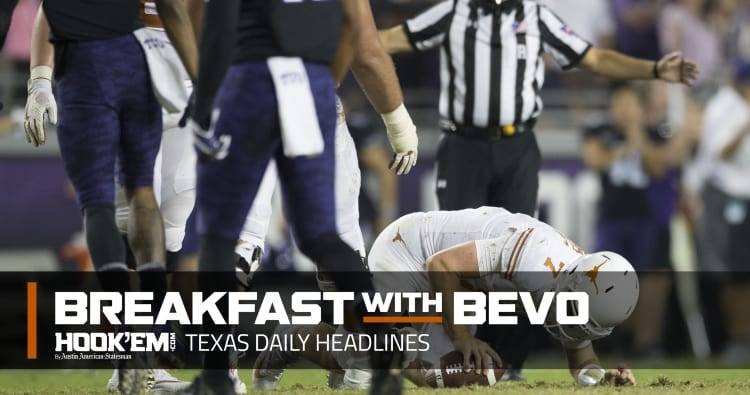 Change in play-calling duties could be step to help offense

The Longhorns’ offense staggered to only seven points on Saturday in its loss to TCU. After nine games in the season, the American-Statesman’s Brian Davis argues that coach Tom Herman should uncover every stone to help give that side of the ball some spark. This includes potentially stripping the play-calling duties from offensive coordinator Tim Beck and giving them to receivers coach Drew Mehringer.

Texas fans caught a glimpse of the 2017-18 Longhorns basketball team during a 99-36 exhibition victory over Oklahoma City University Sunday afternoon at the Erwin Center.

Jatarie White, a transfer from South Carolina, led all scorers with 19 points. Brooke McCarty scored 16 and LaShan Higgs 14. All 10 Longhorns who played scored a point.

Against TCU, Texas allowed 343 yards in a battle of what Herman described as “the two best defenses in our conference.” Texas, however, still dropped to 0-4 against ranked teams.

In those aforementioned games, Texas is averaging 16.3 points. USC, Oklahoma, Oklahoma State and TCU each held Texas under their defense’s scoring averages.

On Saturday night, Longhorn defenders declined to place the blame for UT’s 4-5 record on the shoulders of its offense.

Third and Longhorns: Inside TCU 24, Texas 7