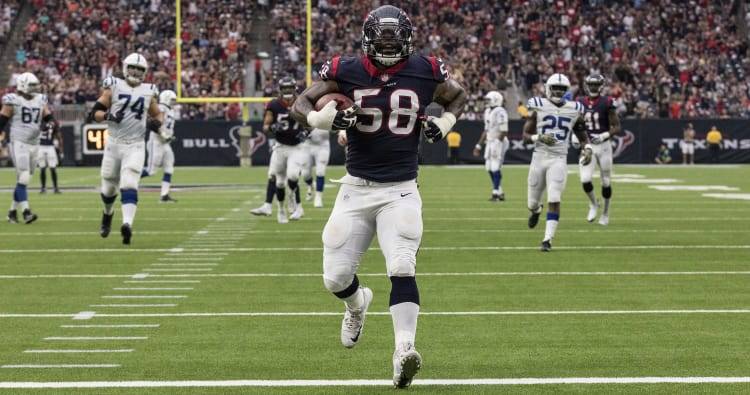 Lamarr Houston has been making the most of his opportunity with the Houston Texans. He was signed following multiple injuries to Houston’s linebackers. On Sunday he breathed some life into the Texans’ chances of winning when he recovered a fumble and returned it 34 yards for a touchdown. There was less than a minute to play in the first half when Houston gave the Texans their first points of the game. Unfortunately, the Texans still fell 20-14 to the Colts.

Marquise Goodwin is looking to make a bigger impact with the 49ers as he’s become the No. 1 receiver with the news of Pierre Garcon moving to the injured reserve list. Goodwin made a couple of plays in Sunday’s 20-10 loss to the Cardinals. His biggest gain came on a 55-yard reception that set up a field goal.

Goodwin finished the game with two catches for 68 yards, but maybe his most impressive play came when he had to play defense. After a 49ers fumble, Cardinals superstar corner Patrick Peterson scooped up the ball and thought he was going to score with nothing but green in front of him. Goodwin had other ideas as he chased Peterson down at the 6-yard line.

Another solid defensive effort was put in by Alex Okafor of the New Orleans Saints. His signing in the offseason has turned into a good free agent acquisition for the Saints. After losing the first two games of the season, Okafor has helped the Saints to six straight wins. He finished Sunday’s 30-10 win over the Bucs with six tackles, a half sack and a tackle for loss.

Brian Orakpo, LB, Titans—Orakpo had four tackles and a half tackle for loss in the 23-20 win over the Ravens.

D’Onta Foreman, RB, Texans—Foreman rushed the ball 11 times for 37 yards in the loss to the Colts.

Derrick Johnson, LB, Chiefs—Johnson made four tackles as the Chiefs fell to the Cowboys 28-17.

Quandre Diggs, CB, Lions—Diggs had two tackles and a tackle for loss in the 30-17 win over the Packers.

Justin Tucker, K, Ravens—Tucker went 2-for-2 on field goal attempts and converted on both of his extra-point attempts in the 23-20 loss to the Titans. His longest field goal went 49 yards.

Roy Miller, DT, Chiefs—Miller had two tackles and a tackle for loss in the loss to the Cowboys.

Hassan Ridgeway, DT, Colts—Ridgeway had one tackle in the win over the Texans.

Jamaal Charles, RB, Broncos—Charles and the Broncos offense struggled in the 51-23 loss to the Eagles. The former Longhorn rushed four times for just one yard. He hauled in four catches for 23 yards..

Nick Rose, K, Redskins—Rose was 1-for-1 on field goals and made both extra points he attempted in the Redskins’ 17-14 win over the Seahawks.

Keenan Robinson, LB, Giants—Robinson and the Giants had a weekend to forget, falling to the Rams 51-17. He made two tackles in the effort.

Phil Dawson, K, Cardinals—The oldest of the Longhorns in the NFL, Dawson made 2-of-3 field goals in the win over the 49ers. He also made both of his extra-point attempts.

Kenny Vaccaro, S, Saints—The safety and the Saints defense are rolling, but an injury may slow the veteran. He made one tackle in the blowout of the Buccaneers but didn’t play the second half due to a groin injury.

Trey Hopkins, OG, Bengals—Hopkins and the Bengals fell to the Jaguars 23-7. The Bengals managed just 29 yards rushing on the day.

Geoff Swaim, TE, Cowboys—Swaim didn’t make any catches, but his Cowboys won their third straight, 28-17 over the Chiefs.

Earl Thomas, S, Seahawks—Thomas missed Sunday’s loss to the Redskins as he was recovering from a hamstring injury.

Fozzy Whittaker, RB, Panthers—Whittaker was inactive for the third straight game with an ankle injury.

Marcus Johnson, WR, Eagles—Johnson played in 20 offensive snaps and was targeted once, but didn’t make any catches in the Eagles’ 51-23 win over Denver.

Colt McCoy, QB, Redskins—McCoy wasn’t called into action in the win over the Seahawks.

Adrian Phillips, CB, Chargers—Phillips and the Chargers were on a bye in Week 9.

Sam Acho, LB, Bears—Acho and the Bears were on a bye in Week 9.

Malcom Brown, DT, Patriots—Brown and the Patriots were on a bye in Week 9.

Brian Robison, DE, Vikings—Robison and the Vikings were on a bye in Week 9.

The post Longhorns in the NFL: Week 9 features a defensive score and big plays appeared first on Hook ‘Em.