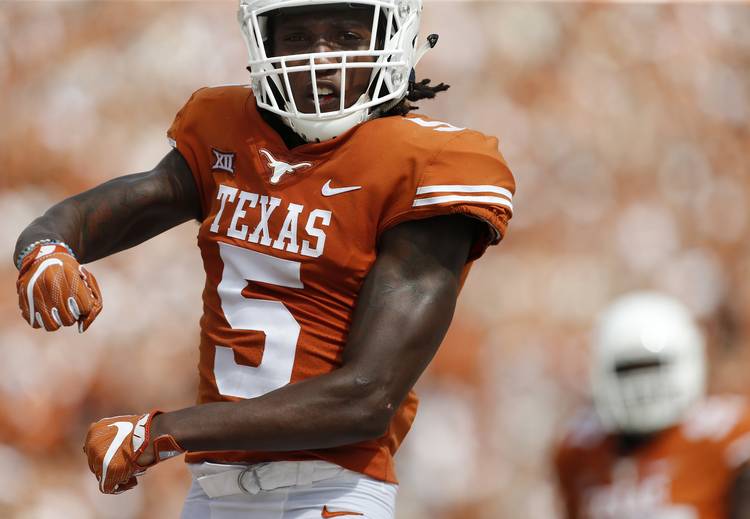 Texas defensive back Holton Hill (5) celebrates breaking up a pass to Oklahoma State wide receiver Marcell Ateman (3) forcing a field goal in the second half of a Big 12 Conference football game at Royal-Memorial Stadium, Saturday, Oct. 21, 2017. (Stephen Spillman / for American-Statesman)

Texas’ difficult year got exponentially worse on Tuesday when it was announced that cornerback Holton Hill would be suspended for the rest of the season.

A junior enjoying the best year of his collegiate career, Hill was suspended for an undisclosed violation of team rules. Neither coach Tom Herman nor school officials would comment on why Hill was suspended, citing privacy issues.

“Unfortunately, not much more that I can say in regards to that,” Herman said after Tuesday’s practice. “But I can tell you we had a great practice today. … We’re a next-man up program, and guys responded the way I knew they would. They went out and had a great practice.”

Herman declined to answer any specific questions about the suspension. Asked how the conversation with Hill transpired, the coach said, “Standard.”

Hill will remain on the roster and continue practicing with the Longhorns. He was on the scout team during Tuesday’s practice. The team’s second-leading tackler will not be allowed to play anymore this season, though, even if the Longhorns (4-5, 3-3 Big 12) make a bowl game.

“The situation’s disappointing, but you’ve got to move on,” linebacker Malik Jefferson said. “You’ve got to encourage him to do better. Just uplift him, and the next guy coming up has to be willing to take that spot and be just as accountable.”

The defense was already shorthanded without nickel back P.J. Locke III (ankle). Now the Horns are without a player who could arguably be the defensive MVP. Herman said junior Davante Davis and freshman Josh Thompson will battle it out for Hill’s starting spot.

Whoever wins that battle will have quite the responsibility. Hill was having an all-conference season. The Houston native returned two interceptions for touchdowns and scored on a blocked field goal in the first two games. Quarterbacks stopped throwing his way in October.

“He’ll truly be missed,” linebacker Gary Johnson said. “There’s not going to be a day where we don’t think about him. But this is a next-man-up mentality. He means a lot to us. Everybody on this team does.”

Hill’s long-term status at Texas is cloudy at best. His name had been mentioned as someone who might consider jumping into the NFL draft, although he wouldn’t be projected as a high-round pick at this point.

Herman said the only two players that NFL scouts have inquired about are Jefferson and tackle Connor Williams.

Asked if that was the only reason, “Yeah, pretty much,” Hill said.

This season with a new confidence, Hill exploded out of the gate, scoring three times in the first two games and becoming an integral part of UT’s defense.

“For me, it was more about trusting in my coaches and having confidence within myself,” Hill said last week. “I know I’m a good athlete with good speed. I just put myself in position to make the plays.”

Longhorns in the NFL: Week 9 features a defensive score and big plays