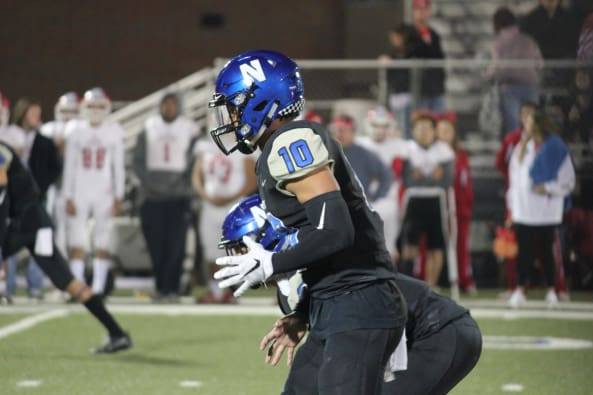 It wasn’t an easy year for Texas commit Casey Thompson. The 4-star quarterback transferred from Southmoore High School to Newcastle High School after his junior season following his former offensive coordinator, Jeff Brickman, who took the job as head coach at Newcastle. The Racers finished the year with a 3-7 record, including a season-finale win over Cache at home.

“I think this year was a growing year for me. I had more responsibility than I’m used to and I grew as a player and a man,” Thompson said following the game. “I feel like I was put on this team for a reason and I hope I helped other people here as much as they helped me.”

Thompson will leave high school as the state of Oklahoma’s leader in passing yards, per his head coach, and accounted for more than 50 touchdowns on the season for the second time in his career. It’s hard to fault Thompson for believing he’s capable of earning the starting job at Texas as a true freshman because, well, he just might.

“Texas is a perfect fit. Fit doesn’t always just mean football,” he said. “I look at the city and the coaching staff and how I feel around the team. I can be myself and be comfortable in my environment. I can compete day one for the starting job.”

Thompson is a true dual-threat quarterback. He rushed for more than 1,000 yards as a sophomore and can still beat defenses with his legs despite playing in a pass-first offense. That’s a trait Tom Herman and offensive coordinator Tim Beck like in a quarterback.

If the quarterback room is Shane Buechele, Sam Ehlinger, Cameron Rising and Casey Thompson for spring practice, the best rusher in the group will undoubtedly be Thompson.

“I knew Casey was talented and could play early in his career, so we started him as a sophomore at Southmoore and he became the first quarterback in Oklahoma history with over 2,500 yards passing and more than 1,000 yards rushing in the same season,” said Brickman. “He’s handled the change in schools and systems well because he’s incredibly smart. He’s leading the state in passing.”

It takes strength to commit to the rival school

Thompson knew heat would come when he committed to Texas in April. He was right. Newcastle is located just outside of Norman, Okla. He’s surrounded by Sooners. His dad, Charles, was a Sooner, as was his older brother Kendal. He bucked tradition and that creates anger.

“I know it takes a strong person to commit to a rival school. I’m in the heart of Sooner land and I have to stay focused on what is best for me, my family and the mission ahead,” Thompson said. “Living here in Oklahoma, it has tested me. There are a lot of temptations and people ready to steer me off track.”

Thompson noted his family and faith keep him grounded. His father, who is familiar with the trappings of football attention at a young age, thinks Casey is handling it all properly.

“It’s an up-and-down cycle because social media is a monster,” Charles Thompson said. “It’s tough on recruits. He’s handled it about as well as I could hope for a young person. He knows when to be active on social media and I enjoy that. He went silent at the start of football and really focused on what was important.”

His head coach has also noticed shade from opponents, classmates and even officials.

“It is sad that it goes on just because Casey is going to Texas. Luckily, he has a thick skin,” Brickman said. “We’ve had opponents throw the horns down at him after plays and stuff like that. The officials even haven’t completely treated him fairly. And that doesn’t even cover social media and what he had to deal with there.”

Even his own father has a few stipulations once his son arrives in Austin.

“I told coach Herman he could get me in white, but I’m not wearing any burnt orange until at least my son is the starting quarterback,” he joked. “We’ll talk about it then.”

Newcastle beats Cache on senior night and Thompson was ready to shake hands and take pictures with his teammates, coaches and the kids on the field. It’s a familiar sight after prep football games. Casey handed his phone to his dad and instructed him to take a photo.

This process was repeated three times because the picture was blurry. Casey wanted a perfect photo.

“You have to be focused on the little things and he’s like that with every part of his life,” Charles said. “People focus on size and arm strength, but one of the biggest attributes of a quarterback is the mental side. He’s been in college quarterback rooms and around me for his entire life. He’s particular about things and that is an asset he needs to have.”

Thompson didn’t start playing quarterback in elementary school despite his dad and older brother excelling at the positions. The younger Thompson wanted to hit, and that competitive drive is another piece of Casey’s game that sticks out to coaches.

“He was five or six years old and would come to games and never take his helmet off,” his father remembered. “He started at running back and linebacker. He loved to compete. I knew he had something special because of his attitude. I didn’t know quarterback-wise until sixth grade. He took off from there because he wanted to soak up everything.”