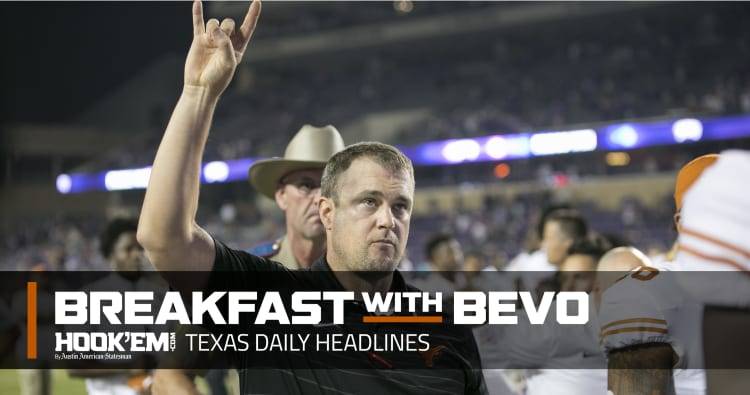 Tom Herman has a calendar just like everyone else. He knows that it is now November, and his Texas football team is still stuck on four wins — needing two more to secure bowl eligibility. Herman also knows his offense is stuck where it has been for most of the season, but insisted Monday that he is still fully behind offensive coordinator Tim Beck and the rest of his staff.

Things have not gone according to plan for Herman during his first season on the 40 Acres. Whether or not they make a bowl game, the Longhorns have failed to live up to many of the expectations placed on them in August. Columnist Kirk Bohls breaks down the reasons why this team is where it is, and what it has left to do to show it has improved since Herman arrived.

Back in the big one

After a two-year absence from the NCAA Tournament, the Texas soccer team learned it will be hosting a first-round game 5 p.m. Friday at Myers Stadium. The Longhorns (13-3-2) earned a No. 4 seed and will host No. 5 North Texas in a rematch of a game UT won 1-0 on Aug. 27. The 2017 season has been a huge step forward for the program and sixth-year coach Angela Kelly after failing to even qualify for the Big 12 tournament in 2016.

Prior to his Monday press conference, Herman took a few moments to comment on the mass shooting that happened Sunday in Sutherland Springs. “Something being that close to home, we’re still trying to find out how, if at all, we can help,” he said. “So please keep all of those affected in your thoughts and prayers.”

Texas fans may see a new (but sort of old) face in the kicking game Saturday. Herman was non-committal when asked who would be the kicker against Kansas, but said fifth-year senior Mitchell Becker was given the opportunity to kick a field goal during the two-minute drill in practice Sunday. Junior Joshua Rowland has done all the kicking for Texas this season.