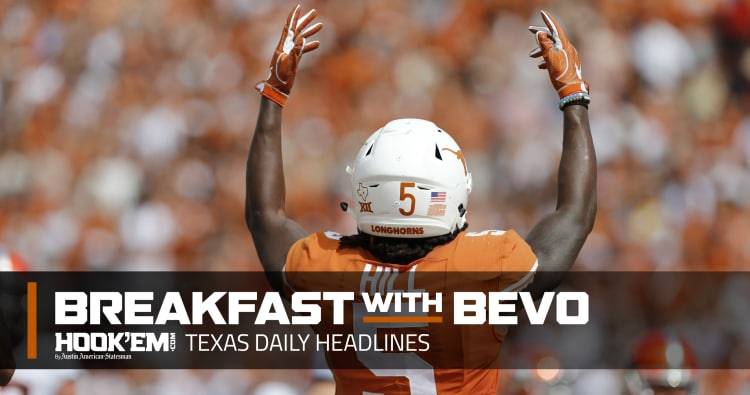 Standout CB Holton Hill suspended for the rest of season

In surprising news Tuesday, Texas announced the suspension of Holton Hill, arguably the best defensive back in the Longhorns secondary, for the rest of the season. Hill violated team rules and will sit the Longhorns’ final three games. Neither coach Tom Herman nor school officials would comment on why Hill was suspended, citing privacy issues. Hill will remain on the roster and is still allowed to practice, but he won’t see any game action. Even if Texas makes a bowl game, he’ll remain sidelined.

Casey Thompson, a 4-star recruit committed to Texas, wrapped up his senior high school season with a win to conclude a tough season. Despite the 3-7 record at Newcastle High School in Oklahoma, Thompson feels he went through a growing experience. Thompson is a dual-threat quarterback that is confident he can compete for the starting job from day one. He sees Texas as “a perfect fit” in terms of the city, the coaching staff and how he feels around the team.

Should Jerrod Heard get a real opportunity to play QB?

American-Statesman columnist Cedric Golden asks this question about Jerrod Heard, “can he do any worse than the others?” The Longhorns are in need of a wild card at the position and Heard has proven that he can make plays with his feet. If for no other reason, let him do more than run three plays so that the two ailing quarterbacks can heal up. Golden reminds Herman that Heard was once a scholarship quarterback as well.

Longhorns and Whataburger team up for canned food drive

The Texas football team is teaming up with Whataburger to collect canned food items before the game against Kansas on Saturday. Fans can donate two or more canned food items in order to purchase one general admission ticket for $20, according to UT. The contributions will benefit Central Texas communities. There were 6,400 tickets remaining for the game on Saturday, the school announced Monday.

Longhorns in the NFL: Week 9 features a defensive score and big plays

Whys of Texas: Simply playing hard does not constitute success, not at Texas