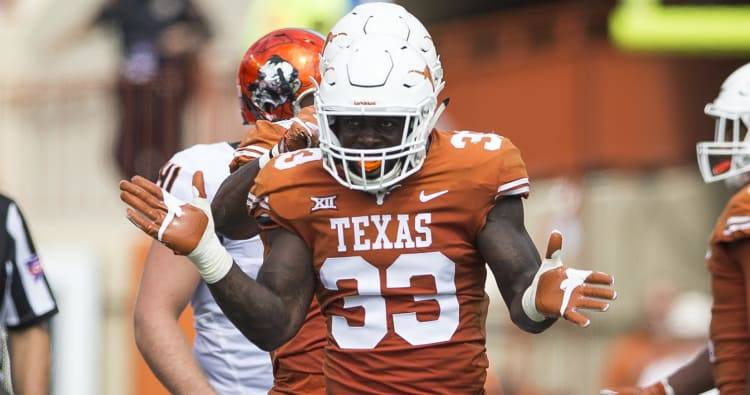 For the last two years, Gary Johnson had only two jobs on the football field.

A standout linebacker at Dodge City Community College, Johnson’s responsibilities were two-fold: Stop the running back and run-fit the A and B gaps.

Johnson has garnered more tasks since his arrival at Texas. He’s had to learn how to play zone defense. Then there was adjusting to the physicality and speed of FBS-level football. Johnson, though, has made two straight starts. He also started against Kansas State on Oct. 7. His 32 tackles are tied for seventh on the team.

“I had to learn some new things and things that I didn’t go over when I was in junior college,” Johnson said. “It was a pretty smooth transition from fall camp up until when the season got here.”

During his two years at Dodge City, Johnson totaled 215 tackles, 11.5 sacks and five interceptions. Rivals and 247Sports, respectively, ranked him as the fourth and fifth-best junior-college recruit in the 2017 recruiting cycle. His talents were sought after by more than two dozen schools, and a SEC rule nixed his original commitment to Alabama. (He eventually chose Texas over USC and Oregon in January).

On Tuesday, the 6-1, 220-pound Johnson listed his speed as one of his strengths. As did defensive lineman Chris Nelson, who said “he can fly around and get to the quarterback or the running back.”

UT coach Tom Herman characterized Johnson as a “hammerhead” at his signing day press conference in February, but he also gushed about that speed. Herman told a story about Johnson winning the Class 5A 100-meter dash as a high school senior in Douglas, Ala.. Johnson weighed 215 pounds and did not use starting blocks. He was still clocked at 10.59 seconds.

“I’m from a track city,” said senior linebacker Naashon Hughes, who hails from Harker Heights. “He’s for real about his speed. It’s definitely an asset to the team.”

Johnson is Malik Jefferson’s backup at the rover linebacker position. Jefferson and his team-leading 86 tackles, however, aren’t going anywhere. So Texas replaced middle linebacker Anthony Wheeler with Johnson in its starting lineup against Baylor and TCU.

Johnson registered six tackles in the 38-7 win over Baylor on Oct. 28. Last week, he had a career-high nine stops in the 24-7 loss in Fort Worth. He also recorded a sack against the Horned Frogs.

“I’ve been doing everything the same, practicing hard,” Johnson said. “(They) just gave me my shot and I did what I had to do and did my job. I’ve just been in ever since then.”

With Johnson in the fold, Texas has the 34th-rated scoring defense in the country. Only 42 teams are allowing fewer yards on a per-game basis. Those 21.3 points and 367.7 yards per game rank third in the Big 12.

The Longhorns, however, will play the rest of the season without cornerback Holton Hill, an All-American candidate who has been suspended for the final three games for a violation of team rules. Nickelback P.J. Locke III is also expected to miss his second straight game with an ankle injury.

Texas will get to re-group this week against Kansas, which last scored more than 20 points in September. Tougher tests against West Virginia (40.2 PPG) and Texas Tech (38.2 PPG) await.

“We’re not there yet, but we’re progressing to be one of the top defenses,” Johnson said. “We’ll just have to finish out strong.”

The post Once described as a “hammerhead,” Gary Johnson is also using his speed to lead Texas’ linebackers appeared first on Hook ‘Em.